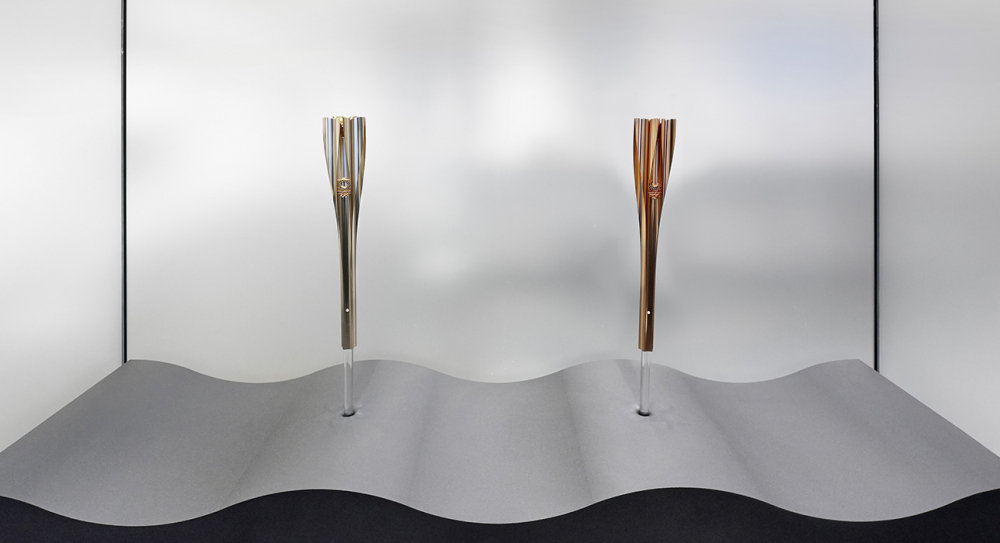 Throughout the summer, guests to Japan House London can see (and take pictures of) the Tokyo 2020 Olympic and Paralympic torches, on display on the Ground Floor. Designed by world-renowned, leading contemporary designer Yoshioka Tokujin the material and shape of the torches were inspired by Yoshioka’s visit to Fukushima Prefecture in 2015, when he held a drawing workshop with children as part of the reconstruction efforts in the region. Some of the aluminium for the torches comes from construction waste from temporary housing used in the aftermath of the Great East Japan Earthquake and tsunami in 2011.

Yoshioka achieved a strong and lightweight design, seamlessly manufactured from one sheet of metal by using an aluminium extrusion technique, which is also used in the production of Japan’s Shinkansen (bullet trains).

Measuring 71cm in length, the structures are designed to gradually open into five sections to resemble cherry blossom – sakura – petals when viewed from above. The design ensures the flame does not go out, even if subject to heavy rain. The weight and shape of the grip makes it easy for anyone to handle, and there is a tactile mark on the front of the torch for those with a visual impairment.

Yoshioka Tokujin
Born in 1967, in Saga Prefecture, Yoshioka Tokujin graduated from the Kuwasawa Design School in Tokyo in 1986. In 2000, he set up his own studio Tokujin Yoshioka Inc. and has gone on to create many innovative, globally acclaimed designs. Yoshioka's work has been internationally recognized with awards such as Design Miami Designer of the Year (2007), ELLE DECO International Design Awards Designer of the Year (2016) and Milano Design Award (2017). His designs are represented in the collections of major institutions, including the Museum of Modern Art (MoMA) in New York, the Musée National d'Art Moderne (Centre Pompidou) in Paris, and the Victoria and Albert Museum in London. Learn more about Yoshioka Tokujin and his work.