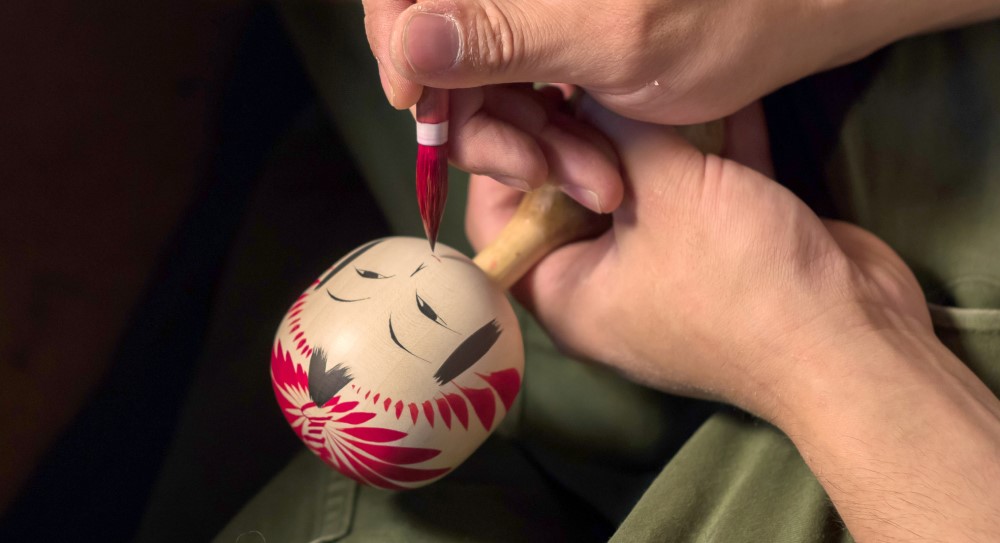 Kokeshi are painted wooden dolls that originate from the Tōhoku region of north-eastern Japan. They are thought to have been first made towards the end of the Edo period (1603-1868 CE) and were hand-crafted by local craftspeople as toys for children and souvenirs for visitors to the hot spring mountain villages.

With March 2021 marking the 10th anniversary of the Great East Japan Earthquake, Japan House London offers participants an insight into craftsmanship from the Tōhoku region with a special opportunity to be a part of an online demonstration live from a kokeshi workshop in Tōgatta in Miyagi Prefecture. Under the guidance of kijishi (woodturner) Satō Yasuhiro, participants can learn about kokeshi and the techniques and patterns that have been handed down over the generations from master to apprentice.

Before the demonstration Ōkōchi Hideo, director of the manufacturing company Tohoku Standard, introduces the tradition of Tōhoku craftwork and the approach of such activities after the events of March 2011.

Ōkōchi Hideo was born in Sendai City, Miyagi Prefecture. He travelled all over Tōhoku as an editor and photographer of a travel information magazine and became an independent photographer and writer. After the earthquake in 2011, he joined the production team of Tetotetote, an online platform promoting regional crafts from Sendai City in Miyagi Prefecture. After deepening exchanges with artists and craftspeople in Miyagi Prefecture, he joined Kaneiri Co., Ltd., which sells crafts, as a director in order to expand the range of his activities. Tohoku Standard is a project which provides a platform to record the traditions of manufacturing from the Tōhoku region over many years, such as local crafts, art, food, architecture, and music, and to introduce these regional crafts and traditions to the world.

Satō Yasuhiro from Sendai Kiji Seisakujo is a kijishi (woodturner) who is involved in all processes of woodworking, from logging to carving and painting to making furniture, vessels, and kokeshi dolls. Sendai Kiji Seisakujo produces Tōgatta Kokeshi, which have long been made in the Tōgatta Onsen resort in Miyagi Prefecture, having been trained by his father Satō Masahiro. His work retains the original patterns of Tōgatta Kokeshi, dolls but also a uniqueness by combining old patterns from Japan and overseas. In particular, for ‘Indigo Kokeshi’, he uses a natural indigo dye that would not be normally associated with kokeshi. He has been active both domestically and internationally, and visited various countries such as Germany and Russia, where he visited a craft factory in Nizhny Novgorod as a member of the Japan-Russia Young Craftsman Exchange Program.