Please note this is an online event and will require you to participate using the video conferencing system Zoom. You will be able to book each event on the separated event page which will be on live soon. 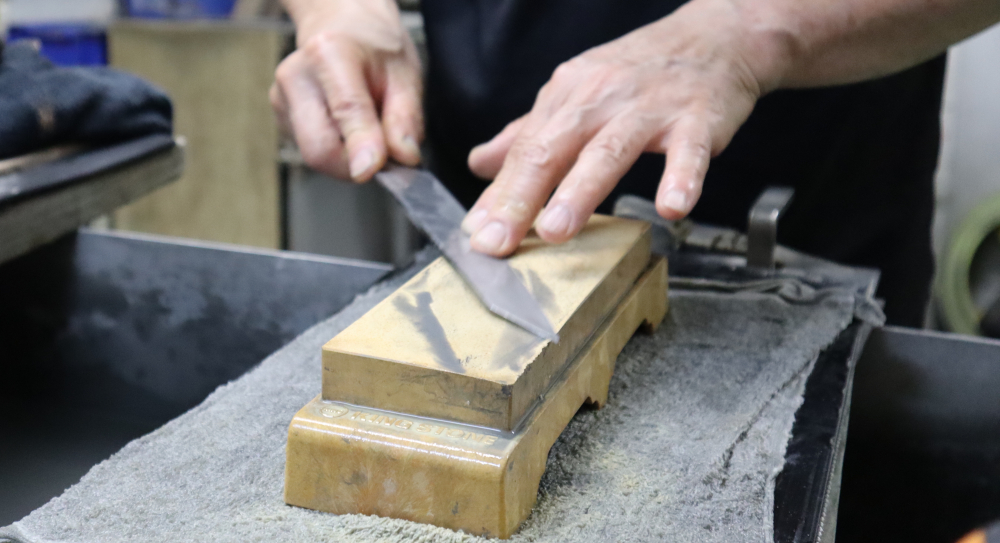 Join us for the third event in Japan House London’s webinar series exploring the industrial heritage of Sakai, the second largest city in Osaka Prefecture and one of the three major blade producing regions of Japan.

Knives forged in Sakai are favoured by many chefs due to their exceptionally sharp edge which is crucial to ensuring high standards of food taste and presentation. To maintain the sharpness of the blade and ensure lifelong use, proper care and maintenance is essential.

During this event, guests receive a masterclass in caring for Japanese kitchen knives by master craftsman Yamatsuka Mistuo, a specialist togishi or sharpener, and chairman of the Sakai Forged Knives Traditional Craftsmen Association. He is then joined by kajiya (blacksmith) Ikeda Yoshikazu, who gives a brief demonstration of cutting techniques using a variety of ingredients of Japanese cuisine.

Under master Yamatsuka’s guidance, guests can gain tips on how to practise knife sharpening at home and can hone their skills in order to make their blades last a lifetime.

During this live online event, moderated by Japan House London Programming Director Simon Wright, there is an opportunity for registered guests to ask questions to the speaker.

A selection of knives from Sakai City are available for purchase in The Shop at Japan House London.

Yamatsuka Mitsuo became independent in 1984 after training under his uncle Yamatsuka Yoshikazu for 10 years. He was certified by Japan’s Ministry of Economy, Trade and Industry (METI) as a Traditional Craftsman in 1999. He has been commended for his work as an Osaka Prefecture Craftsman in 2016, a Sakai City Manufacturing Meister in 2017, and he received the Kinki Bureau of Economy, Trade and Industry Directors’ Commendation in 2020. He is now the chairman of the Sakai Forged Knives Traditional Craftsmen Association.

Ikeda Yoshikazu began making knives in 1967 as an apprentice to his father, a blacksmith. In 1983, he opened his own forge, founding the Ikeda Tanrenjo (Ikeda Forging Factory). Since then, he has been engaged in kitchen knife manufacturing, inheriting and developing the techniques and traditions of Sakai forged knives. Ikeda manufactures Japanese-style kitchen knives, mainly for professional chefs such as Mizu-honyaki and Suminagashi. In 1988, he was certified by METI (Japan’s Ministry of Economy, Trade and Industry) as a Traditional Craftsman and is currently the vice-chairman of the Sakai Forged Knives Traditional Craftsmen Association. He has won many awards for his work, including the Sakai City Special Contribution Award, Kansai Bureau of Economy, Trade and Industry Award, and the Osaka Prefectural Award ‘Master Craftsman in Naniwa’.