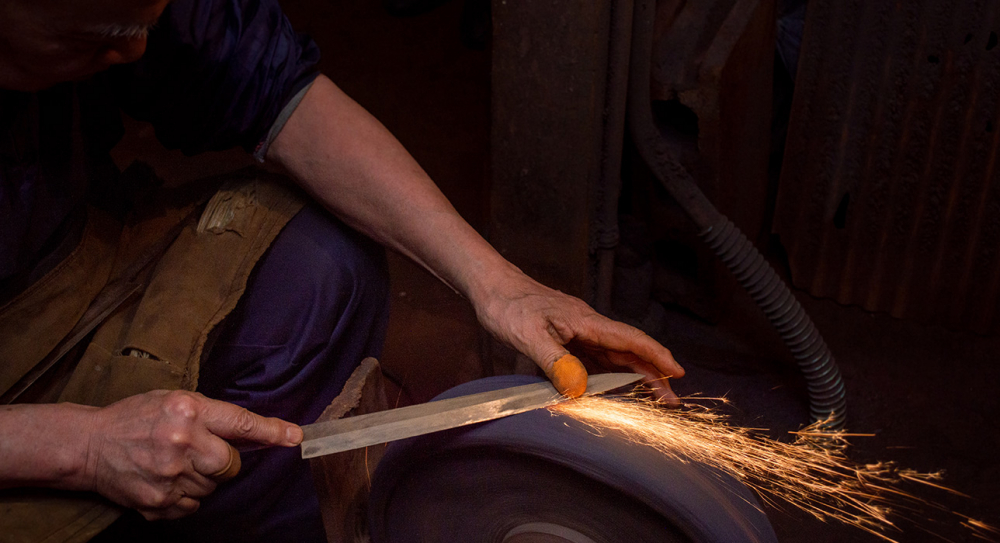 Sakai forged knives boast around 600 years of history and are favoured by many Japanese chefs. Developed in the Edo Period (1603–1867 CE), the knives are handmade by skilled blacksmiths and craftspeople who each specialize in a different part of the production process from forging and the sharpening of the blade to the making and attaching of the handle.

During this online event broadcast from the Sakai City Traditional Crafts Museum, guests meet two of the master craftsmen engaged in making Sakai knives today. Kajiya (blacksmith) Ikeda Yoshikazu introduces the forging process and togishi (sharpener) Yamatsuka Mitsuo presents a live demonstration of the sharpening process which gives Sakai forged knives the exceptionally sharp edge for which they are renowned. Following the demonstration, registered guests have an opportunity to ask questions to the speakers.

Ikeda Yoshikazu began making knives in 1967 as an apprentice to his father, a blacksmith. In 1983, he opened his own forge, founding the Ikeda Tanrenjo (Ikeda Forging Factory). Since then, he has been engaged in kitchen knife manufacturing, inheriting and developing the techniques and traditions of Sakai forged knives. Ikeda manufactures Japanese-style kitchen knives, mainly for professional chefs such as Mizu-honyaki and Suminagashi. In 1988, he was certified by METI (Japan’s Ministry of Economy, Trade and Industry) as a Traditional Craftsman and is currently the vice-chairman of the Sakai Forged Knives Traditional Craftsmen Association. He has won many awards for his work, including the Sakai City Special Contribution Award, Kansai Bureau of Economy, Trade and Industry Award, and the Osaka Prefectural Award ‘Master Craftsman in Naniwa’.

Yamatsuka Mitsuo became independent in 1984 after training under his uncle Yamatsuka Yoshikazu for 10 years. He was certified by METI as a Traditional Craftsman in 1999. He has been commended for his work as an Osaka Prefecture Craftsman in 2016, a Sakai City Manufacturing Meister in 2017, and he received the Kinki Bureau of Economy, Trade and Industry Directors’ Commendation in 2020. He is now the chairman of the Sakai Forged Knives Traditional Craftsmen Association.

The History of Sakai: in Conversation with Simon Kaner and Sakai City Museum