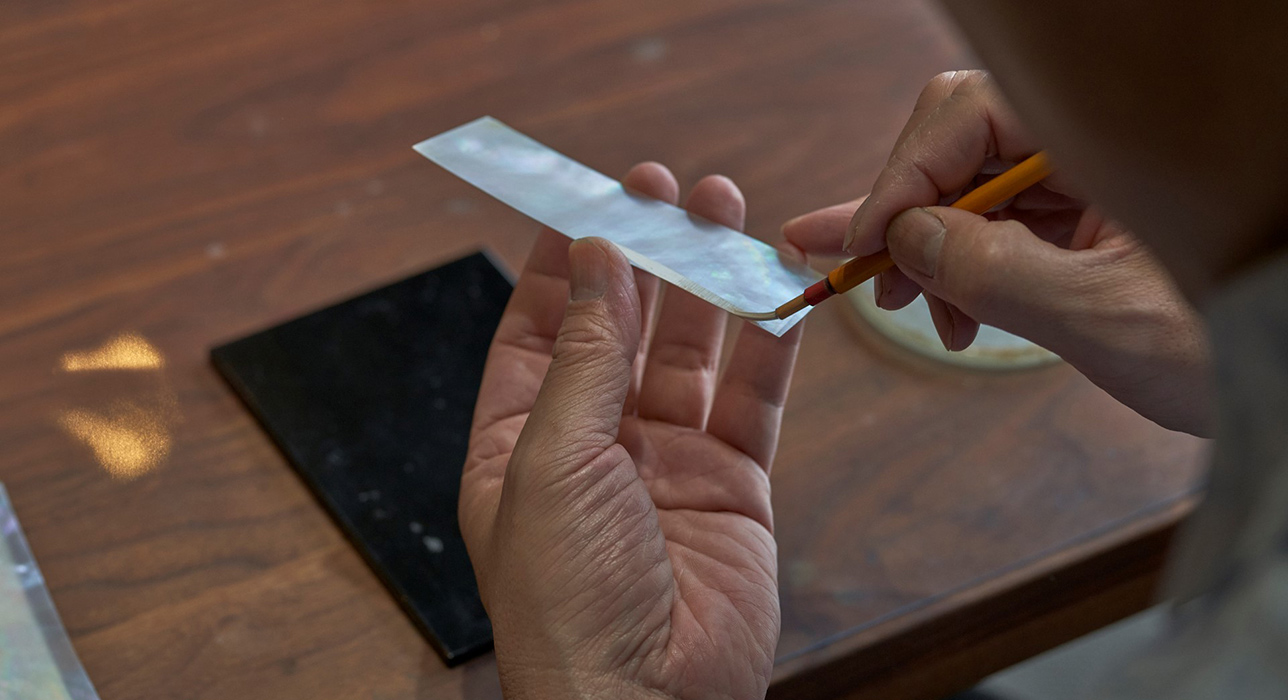 Raden (lit. ‘shell inlay’) is a decorative technique involving the application of pieces of iridescent mother-of-pearl, cut from the inside of shells, onto a surface which is then coated with lacquer and polished. It has been used in Japan since the Nara Period (710-794 CE).

During this live online event, moderated by Japan House London Programming Director Simon Wright, there is an opportunity for registered guests to ask questions to the speakers.

Okamoto Naho
Under the influence of her architect/abstract painter father, Okamoto grew up surrounded by art and design from an early age. While she was studying space design at Kuwasawa Design School, her interest in designing something closer to the body increased and she began to lean toward creating jewellery. In 2006, Okamoto started the jewellery brand SIRI SIRI. She has developed a unique world in which materials that are overlooked in our daily lives are made sublime in jewellery. Okamoto was selected for International Womenʼs Day 2014 by Google, and she became the youngest winner to receive the Kuwasawa Award in 2015. She recently finished studying communication between people and things at graduate school in Switzerland. In 2020, she was selected as a finalist for The Luxury Innovation Award in Switzerland. Her sustainable brand's approach of creating contemporary jewellery while using Japanese techniques and materials was recognized as 'inspiring'.

Matsuda Shōkan
Born in Fukui Prefecture, Matsuda is a third-generation maki-e artist. Since 1986, he has studied under the Ishikawa Prefecture Tea Ceremony writer Gotō Jyōtarō and began to train in the art of tea utensils. In 2005, he established Maki-e Studio Shōkan in Minami Aoyama, Tokyo (the studio moved to Ginza in 2018). He works actively both domestically and internationally to spread appreciation of lacquer and the enjoyment of lacquer art, not only through award-winning contributions to various lacquerware exhibitions and art exhibitions, but also through costume cooperation on TV commercials and the holding of workshops, including at the Victoria and Albert Museum.