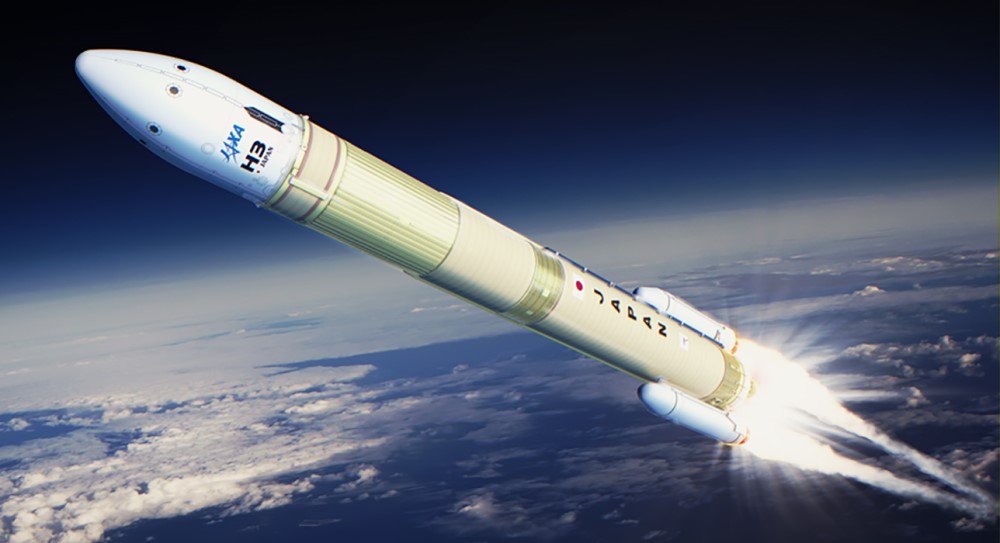 Continue your virtual voyage through the universe in the second in our series of online events which introduces the exciting work of JAXA, the Japan Aerospace Exploration Agency.

As Japan’s national aerospace and space agency, JAXA is responsible for research and technology development in the fields of space and aeronautics. Its missions include asteroid exploration in search of the origins of the universe, R&D and operations of launch vehicles and earth observation satellites, and participation in international space exploration projects.

The second event in this special series focuses on JAXA’s cutting edge activities in the fields of space transportation and earth observation satellites.

Yamashiro Ryōma (Associate Senior Engineer, JAXA) gives an introduction to Japanese launch vehicles: those currently in operation, such as the H-IIA/B and Epsilon, and under-development and future projects including the next-generation ‘easy-to-use’ H3 Launch Vehicle.

Noda Akiko (Associate Senior Administrator, JAXA) then looks at JAXA’s major earth observation satellites in operation and under development and explains how they contribute to our daily life and environmental protection.

As part of a partnership with the Royal Astronomical Society, the event will be chaired by Professor Martin Barstow, Professor of Astrophysics and Space Science at the University of Leicester, Director of Strategic Partnerships at Space Park Leicester and Chair of the UK Space Agency Science Programme Advisory Committee.

Working for JAXA since 2002, he has been involved in an advanced science and technology programme run by the Cabinet Office of Japan and has conducted a one-year period of research on a spaceplane at DLR (the German Aerospace Center). He received a master's degree in aerospace engineering from the University of Tokyo in 2002.

Martin Barstow joined the University of Leicester in 1979, becoming Professor of Astrophysics & Space Science (2003), Head of Physics & Astronomy (2005-09), Pro-Vice Chancellor/Head of Science & Engineering (2009-16) and Pro-Vice Chancellor/Director of the Leicester Institute of Space & Earth Observation (2016-19). His research is into hot white dwarf stars and the interstellar medium and he has published more than 450 papers. He has been involved in many space missions, including Voyager, ROSAT, EUVE, FUSE, Hubble and ESA’s Gaia astrometry mission. He has been a member of the ESA Astronomy Working Group, UKSA Space Programme Advisory Committee and President of the Royal Astronomical Society (2014-16). In 2019, he chaired the programme committee of the UK Space Conference. He is currently Chair of Space Telescope Institute Council, a member of the board of the Association of Universities for Research in Astronomy and was appointed Chair of the UK Space Agency Science Programme Advisory Committee in July 2019. He is the originator of the concept of Space Park Leicester, creating an economic space cluster with industry partners, a leader in its development and is Director of Strategic Partnerships for the project. He also leads the SPRINT project, supporting growth of small companies in the space sector.