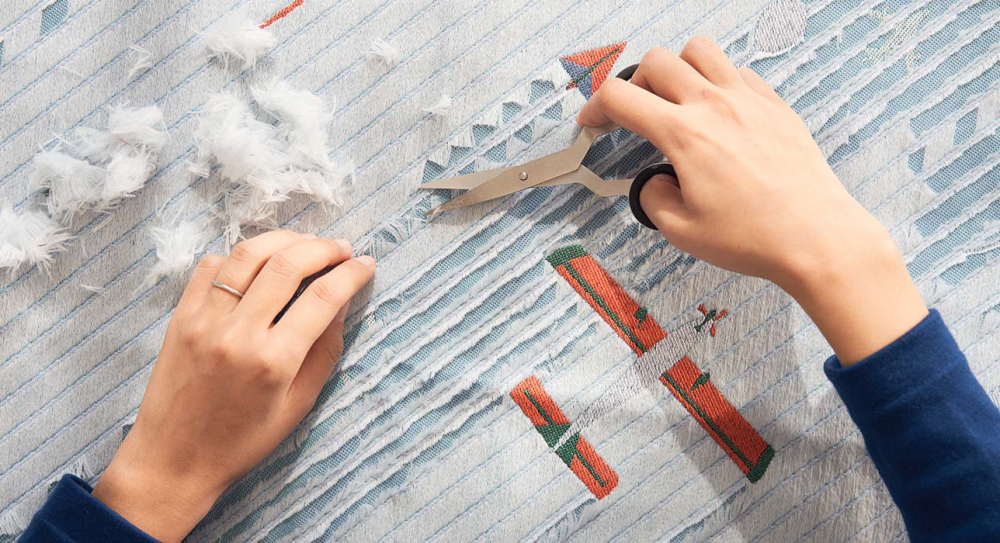 Pay a virtual visit to the studio of Japanese textile designer Himuro Yuri whose playful and surprising designs created through jacquard weaving and cutting are featured in the new Liberty Fabrics collection From Japan with Love.

Following an introduction to this co-created collection by Liberty’s Lead Designer Ffion Griffith, guests are transported to Himuro’s studio in Taitō, Tokyo. There, Himuro explains the creative processes and vision behind her unique design Sky and gives a special live demonstration of her signature cutting technique which is used in Sky and other works from her Snip-Snap collection.

During this live online event, moderated by Japan House London Programming Director Simon Wright, there is an opportunity for registered guests to ask questions to the speakers. During the Q&A Himuro Yuri and Ffion Griffith will be joined by Liberty’s Design Director Mary-Ann Dunkley.

This event is the second in a two-part series held in partnership with Liberty coinciding with the release of the new Liberty Fabrics collection From Japan with Love. The fabric collection was created as a result of a collaboration between the Liberty design team and eight contemporary Japanese artists working within a wide range of graphics, textiles and fine art mediums to showcase the broad diversity of Japanese design.

On 27 July, Japan House and Liberty present the first event in this series: an online talk and conversation exploring the historical ties between Japan and Liberty with Liberty Head Archivist Anna Buruma.

Selected items from the Liberty Fabrics collection From Japan with Love are available for purchase in The Shop at Japan House London from 21 July 2021.

Himuro Yuri
A textile designer who has studied in both Japan and Finland, Himuro Yuri creates collections that explore the unique and often surprising results that occur from interactions between people and textiles. Specializing in jacquard weaving and cutting, Himuro often snips away the surface section of the threads to create new and unexpected colours and shapes. She has won many international awards for her work, including from Dwell and Elle Deco, and previously collaborated with Liberty Fabrics for Liberty Champions collection.

Mary-Ann Dunkley
Mary-Ann Dunkley graduated in printed textiles from Nottingham Trent University. Working as a textile artist she was invited to work on a project for Paul Smith Ltd and fell in love with the energy of print, fashion and interiors, so she stayed, for 18 years. She became Textile Design Manager and discovered the Japanese passion for British print, enjoying over 25 trips to discover its culture and fashion, working closely with creatives and makers in Tokyo. Whilst working on menswear and accessories she became familiar with Liberty Fabrics and its archives and in 2015 moved to work more closely with this iconic British brand. She is now Design Director, overseeing the creative team for international collections of Fabrics and products.

Ffion Griffith
Ffion graduated from a BA degree course in Textile Design at Chelsea College of Art with a focus on traditional woven textiles inspired by her native country of Wales. On graduating she received a mentorship with Texprint, exhibiting work in London, Paris and Shanghai, and working at a couture silk mill in the famous Italian Como area. Since working at Liberty for eight years, she is now Lead Regional Designer – overseeing a team creating tailored collections and exclusive prints for customers in Japan, China and the Middle East. She works closely with the Liberty Japan design team in Tokyo and makes bi-annual trips to Japan to meet customers and present collections. She is involved in all aspects of the printed textile process, from concept and design to colouration and printing.

The Lost Textile of Ryukyu