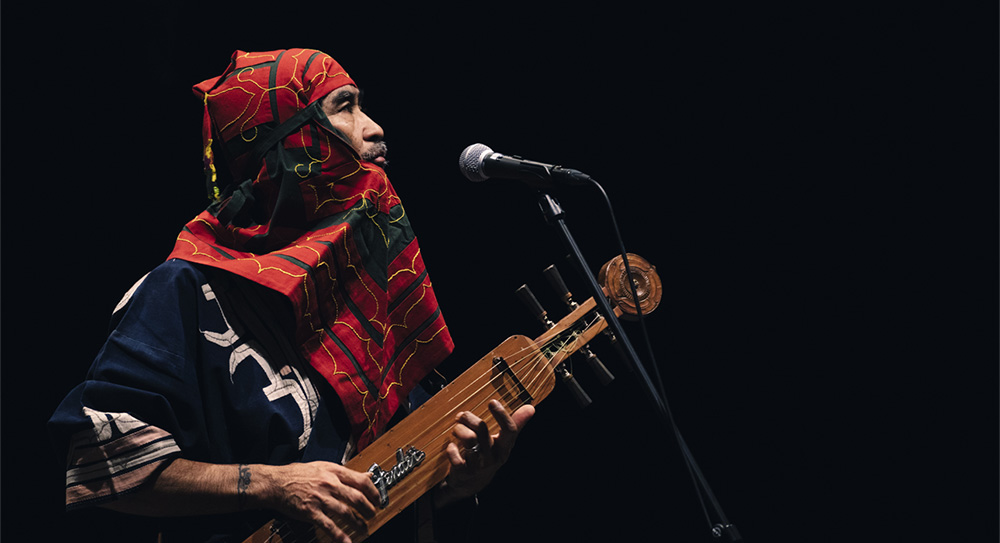 To open a series of events celebrating Ainu culture in contemporary society, Japan House London is delighted to welcome the internationally acclaimed tonkori player Oki who will be performing with the support of Marewrew, an all-female musical ensemble.

Tonkori are plucked string musical instruments, primarily used by the Ainu of Sakhalin. Each tonkori is made from a single piece of wood from one tree, such as spruce, yew or magnolia. The instrument has been used by the Ainu to perform songs inspired by nature and the behaviour of animals and humans, love songs and to accompany dance.

There are many traditions and legends associated with the tonkori in Ainu culture. In one tradition, Ainu would play the tonkori at the bedside of a sick person throughout the night because the kamuy (Ainu god or spirit) of sickness is said not to like the sound. There is also a story that during an enemy invasion, a woman who was the most talented tonkori player in the village, played the tonkori, disorienting the enemy and leading to their defeat.

The instrument’s use declined in the modern period, although it has been experiencing a revival in recent years through efforts by prominent musicians such as Oki.

This concert is part of a season of events held in collaboration with Hokkaido Prefecture in conjunction with the opening of Upopoy, Japan’s new national museum featuring the history and culture of the Ainu, in Shiraoi, Hokkaido in May 2020.

In 1992 Oki received his first tonkori- a stringed instrument developed by the Ainu of Sakhalin. Although the instrument was regularly displayed behind glass in museums, there were virtually no active tonkori players at this time. Oki devoted himself to studying the tonkori and soon began making his own. In 1996 he released his first album ‘Kamuy kor nupurpe.’ Shortly after he established Chikar Studio in order to encourage other Ainu artists and promote the music of Ainu artists to the world. Chikar Studio has presently released a total of 20 albums, including titles by the singer Andō Umeko and the all-female ensemble Marewrew, who sing Ainu dance songs called ‘Upopo’ with a modern sensibility. Oki Dub Ainu Band features the tonkori in a band setting with drums, bass, keyboard and dubwise. They perform often at festivals in Japan and overseas.

Marewrew, meaning ‘butterfly’ in the Ainu language, is a group of female artists working on the diffusion and renewal of the upopo songs of the Ainu people of northern Japan. In 2010, after launching their first mini-album ‘MAREWREW’, they started full-scale activities and were brought to the attention of local and international audiences thanks to their performances at the international world music festival Womad (UK) and other European venues. Their work, which incorporates a modern arrangement of upopo’s charm, has been highly praised.