Mashiko – A Celebration of Hamada Shōji and Bernard Leach

*This event is now fully booked, however, a live stream of the conversation will be available on Facebook and YouTube on the day. 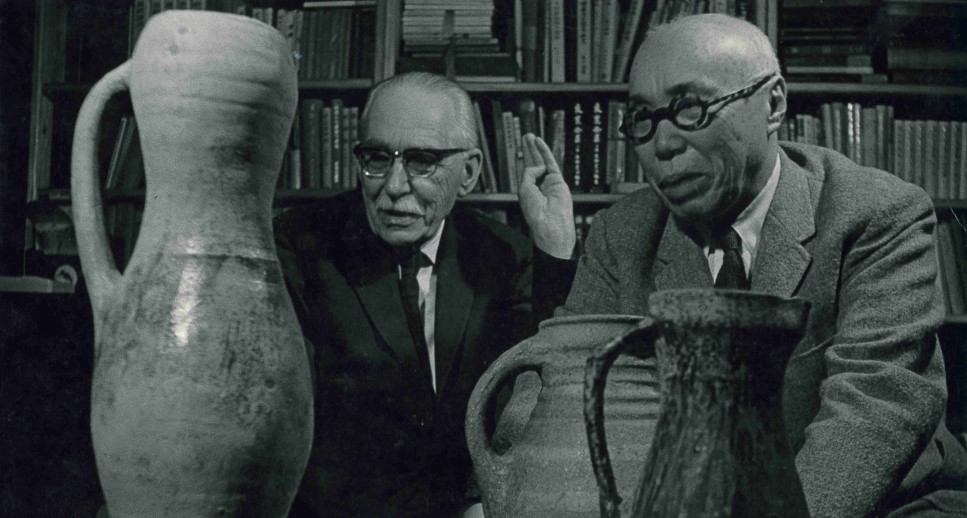 In celebration of the 100th anniversary of the founding of Leach Pottery in St Ives in Cornwall, Japan House London is delighted to host a series of online conversations exploring Japanese studio pottery from the 20th century through the present day and beyond.

The first event in this series focusses on the town of Mashiko in Tochigi Prefecture as a site of historical significance for ceramics in Japan. Matsuzaki Yuko, curator at the Mashiko Museum of Ceramic Arts, is joined in conversation by Leach Pottery curator Matthew Tyas to discuss the contributions of Hamada Shōji and Bernard Leach in forging the shape of Japanese and British studio pottery.

Bernard Leach, regarded as the father of British Studio Pottery, established his workshop in St Ives in 1920 with the help of Hamada Shōji, who would become a major figure in the mingei (Japanese folk crafts) movement, who was designated a ’Living National Treasure’ in 1955. Leach and Hamada set up the first wood-fired climbing kiln (noborigama) in the UK and started producing their individual pieces in 1921.

After three years in St Ives, Hamada returned to Japan and eventually established his own workshop in the town of Mashiko, Tochigi Prefecture which has grown to be one of the most well known ceramic making centres in Japan.

During this live online event, guests will have the opportunity to ask questions to the speakers.

Matsuzaki Yuko is Curator at the Mashiko Museum of Ceramic Art, Tochigi Prefecture in Japan. She graduated with an MA in Aesthetics from the University of Tokyo and started working in Mashiko in 2013 launching the Mashiko Museum Residency Program. She has curated many exhibitions including ‘Vessels: The Spirit of Modern British Ceramics’ (2014), ‘Shoji Hamada's Journey to the West’ (2015), ‘On the Wind from St Ives - Japanese Potters Who Studied at the Leach Pottery’ (2016) and ‘Started it in England: Hamada and Leach, in Two Ways’ (2020, co-curator). She writes about contemporary ceramics as a contributor to ceramic magazines.

Dr Matthew Tyas is Curator at the Leach Pottery, St Ives. Recent projects have focussed on delivering the Pottery’s centenary celebrations for 2020/21. Responsibilities also include curation, interpretation, programming, research, and exhibitions. His interest in pottery began over 20 years ago collecting pots and soon grew into making them. From early on he was drawn to aspects of the Leach legacy and its roots in vernacular pottery. Over the years, he became interested in how this legacy could be explored in the contemporary world. This led him to a PhD involving the Leach Pottery and the application of digital technologies from a craft maker’s perspective. He still pots, now returning to the forms, clays, and glazes that inspired him in the beginning. He tries to balance this practice with writing, having recently contributed to the Whitechapel Gallery’s current exhibition Kai Althoff goes with Bernard Leach. His next piece will be for the Modernist about the Leach Pottery’s original Standard Ware pottery.