The Hall, Japan House
followed by a drinks reception 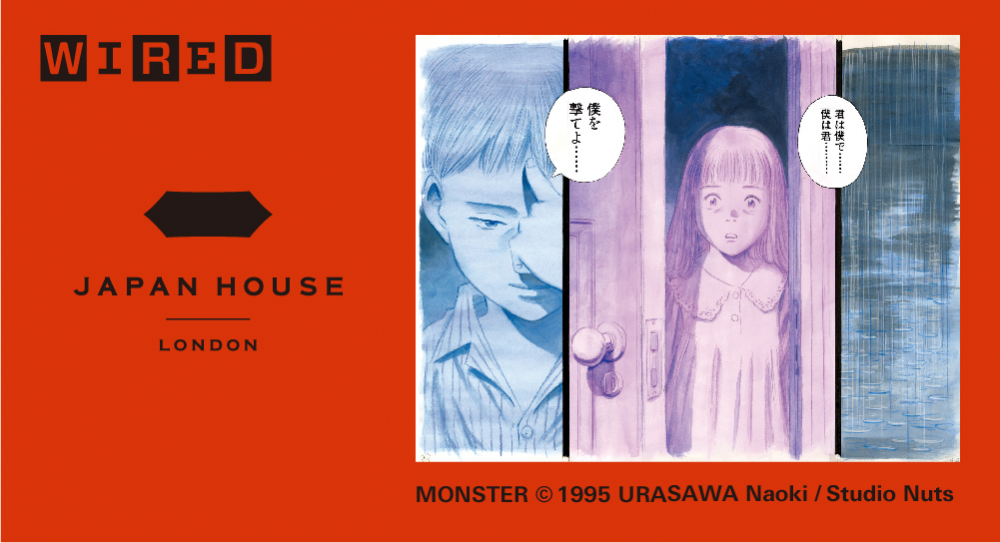 Japan House is collaborating with WIRED for a special event with internationally acclaimed manga artist Urasawa Naoki on Wednesday 5 June 2019 at Japan House London. The exclusive one-nighter will offer audiences a rare chance to see Urasawa bring his art to life in a live drawing demonstration, and engage in discussion on his career to date in an intimate setting. Expect to have your expectations of what manga is, and who it is for, shattered by one of the industry’s greatest living artistic talents.

This summer Japan House London presents an exhibition on the popular form of Japanese illustrated literature - manga - through the work of manga artist, Urasawa Naoki. Running from 5 June until 28 July 2019, the ‘This is MANGA – the Art of URASAWA NAOKI’ exhibition immerses visitors in the iconic Japanese art form and highlights the breadth of Urasawa’s narrative styles with a display of selected stories from some of his major works, including ‘YAWARA!’, ‘MONSTER’ and ‘20th Century Boys’.

This event at Japan House London features WIRED writer Matt Kamen in conversation with Urasawa Naoki. Join us to find out more about one of Japan’s greatest manga artists and for the opportunity to ask him questions yourself. Co-presented by Japan House and WIRED, the event includes after-hours’ access to the ‘This is Manga’ exhibition and a networking reception with canapes and Japanese drinks.

Urasawa Naoki was born in Tokyo in 1960. Urasawa made his debut with ‘BETA!!’ in 1983, and has authored many works since, such as ‘YAWARA!’, ‘MONSTER’, ‘20th Century Boys’ and ‘BILLY BAT’ (story co-creator: NAGASAKI Takashi) among others. After garnering renewed popularity more recently with ‘MUJIRUSHI’ (‘The Sign of Dreams’, with the cooperation of Fujio Productions), a collaborative project with the Louvre Museum, Urasawa is currently writing a new series, ASADORA! in Big Comic Spirits, a weekly Japanese manga magazine published by Shogakukan. His work is now published in more than 20 countries, with Japanese circulation alone recorded at a total of 127 million copies. Domestically, he has received the Shogakukan Manga Award three times and the Tezuka Osamu Cultural Prize, as well as numerous awards abroad including the Angouleme International Cartoon Festival Intergenerational Award and multiple Eisner Awards for Best U.S. Edition of International Material – Asia category. In addition, as a musician, he has composed numerous works in the folk rock genre, performing live with his band and releasing two albums to date. His music has been frequently used as theme music for the film and television adaptations of his manga work.

Matt Kamen is a journalist specialising in games, Japanese media and technology, with work appearing in prolific publications including WIRED, The Guardian and Empire. His writing analyses developments and trends within virtual reality, films, culture and comic books.

WIRED is celebrating ten years of what's next – bringing you the people, trends and big ideas that will change our lives. Across the print magazine, online, video, podcast and events, we explore the next big ideas in science, culture, business – wherever innovation and new thinking are reshaping our world. Our event series include large-scale conferences to intimate evening events, and bring to life the compelling stories found within WIRED's channels. Visit www.wired.co.uk/events for more information.