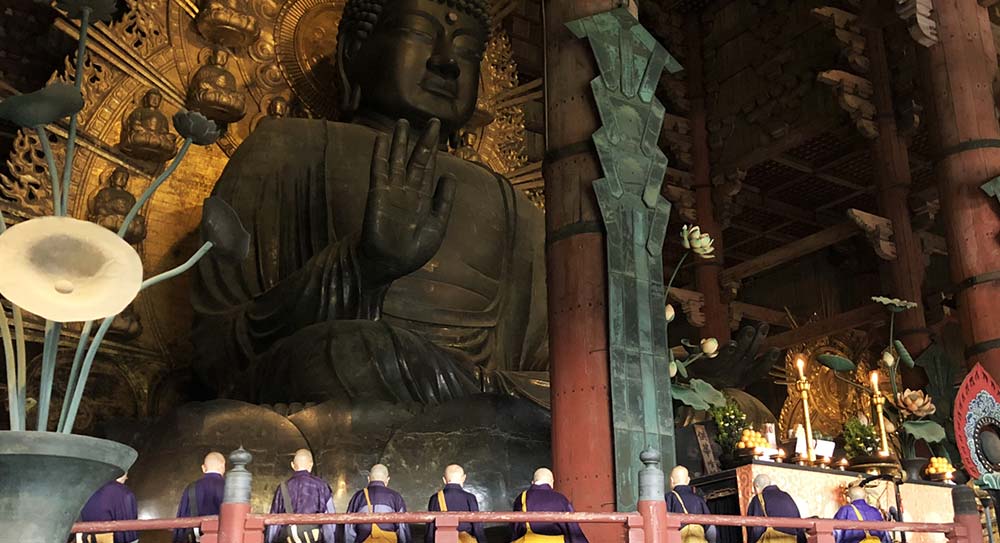 Rarely heard outside of Buddhist temples, this event offers Japan House guests the chance to experience the meditative chants of shōmyō in a special concert-lecture featuring monks from four of Nara’s most important temples.

Boasting a history of more than 1200 years, the Japanese form of Buddhist sutra chanting, shōmyō ranks among the world’s oldest continually performed musical forms. Originating in ancient India, Buddhist sutra chanting was transmitted to China along the Silk Road before entering Japan. The first recorded performance of shōmyō in Japan was at a ceremony to celebrate the completion of the Great Buddha at the famous Nara temple of Tōdai-ji in the year 752.

During this event at Japan House, Tōdai-ji’s chief monk or bettō explores the history and forms of shōmyō in a special talk. The talk is accompanied by a demonstration of the ancient ritual in which a chorus of monks from the temples of Tōdai-ji, Yakushi-ji, Tōshōdai-ji and Saidai-ji join their voices to recite chants from the shōmyō repertoire.

This concert-lecture is part of a season of events allowing Japan House visitors to experience the sacred rites and rituals of the religions of Buddhism and Shinto led by representatives from the temples and shrines of Japan’s ancient capital of Nara. It coincides with the British Museum’s display of rare Buddhist and Shinto treasures ‘Nara: sacred images from Early Japan’.