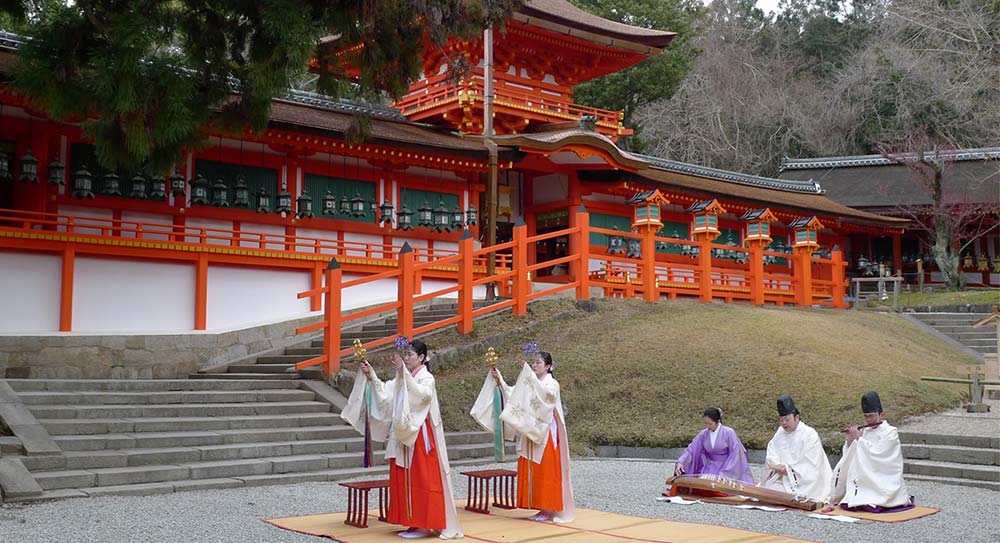 Kagura is a performance of music and dance for kami (Shinto ‘spirits’ or ‘deities’). It has evolved over time to encompass a number of different forms, including folk traditions, but began as a sacred dance performed by female shrine attendants or priestesses in veneration of kami.

In a special lecture, chief priests (gūji) from the shrines Kasuga Taisha and Niukawakami explore the sacred roots of kagura and its relationship to the Japanese indigenous religion of Shinto.

Dressed in ceremonial clothes, miko from Kasuga Taisha perform a kagura dance, the roots of which go back to the early-mid Heian period (c. 901-922). The dance is accompanied by song, shakubyoshi (wooden percussion instrument) and kagurabue (kagura flute).

This event is part of a season of events allowing Japan House visitors to experience the sacred rites and rituals of the religions of Buddhism and Shinto led by representatives from the temples and shrines of Japan’s ancient capital of Nara. It coincides with the British Museum’s display of rare Buddhist and Shinto treasures ‘Nara: sacred images from Early Japan’.