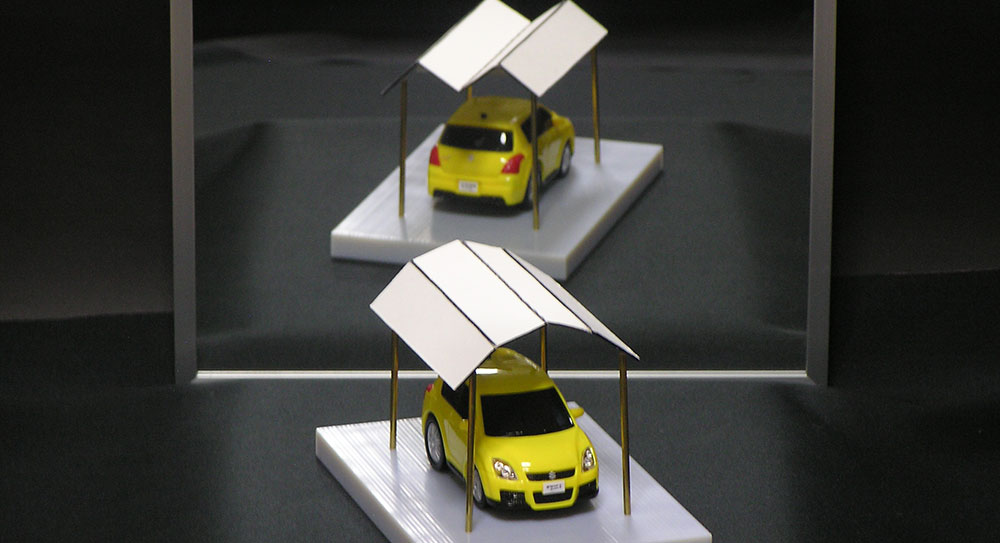 The term ‘impossible pictures’ or ‘impossible objects’ originally was used to refer to illustrations of imaginary 3D structures that cannot exist as real physical objects. Along with the Dutch artist M.C. Escher, Japanese illustrator Anno Mitsumasa is one artist who is known for developing and using this type of picture effectively, particularly in his first picture book ‘Mysterious Pictures’.

Through his research into the mathematical construction of these images, internationally renowned Japanese mathematician and artist Professor Sugihara Kokichi (Meiji University, Japan) has discovered that some of these so called ‘impossible pictures’ are not necessarily impossible; in fact some can be realized as actual 3D objects.

Starting with this finding, Professor Sugihara has developed various mind-bending 3D ‘impossible objects’ and optical illusions. These include ‘impossible motion objects’ such as ‘anti-gravity’ slopes which appear to allow marbles to roll uphill, and ‘ambiguous objects’, such as circular pipes that look square in a mirror.

Demonstrating a range of his astonishing and award-winning ‘impossible objects’ through images, videos and the actual models, Professor Sugihara invites guests to consider why our human brains are unable to perceive these objects’ true shapes. Watch the demonstration video here.

In addition, Japan House London hosts a series of interactive workshops with Professor Sugihara on Saturday 28 and Sunday 29 September in which guests will have the opportunity to create a model of one of his most famous award-winning optical illusions.

Explore Anno Mitsumasa’s own ‘impossible pictures’ in the exhibition ‘Anno's Journey: The World of Anno Mitsumasa’ on display in the Japan House Gallery until 27 October 2019.

About Sugihara Kokichi
Sugihara Kokichi is a Meiji University distinguished professor emeritus as well as a professor emeritus of the University of Tokyo. His research area is mathematical engineering. Through his research on computer vision he developed a method for constructing 3D objects from ‘impossible figures,’ and extended his research interest to human vision and optical illusion. Constructing mathematical models of human vision systems, he has created various new classes of impossible objects. His illusions have won the first prize in the Best Illusion of the Year Contest three times in 2010, 2013 and 2018, and the second prize twice in 2015 and 2016.