• Prince William, The Duke of Cambridge said in a speech “This amazing building - Japan House London - is intended to be the bridge across which the best in ideas and creativity between the UK and Japan will flow.”
• The Duke tried his hand at copper-beating with a Japanese master craftsman; played chopstick games with school children; sampled sushi; talked Rugby World Cup 2019; discussed the upcoming Japan-UK Season of Culture running 2019-2020; and gave a toast in Japanese with sake.

On 13 September 2018, Prince William, The Duke of Cambridge formally opened Japan House London, the new cultural home of Japan in the UK. His Royal Highness was accompanied by Japan's Deputy Prime Minister, Mr Taro Aso and Mr Koji Tsuruoka, Ambassador of Japan to the UK.

Japan House London is a new permanent cultural venue on Kensington High Street. It aims to foster a greater understanding of Japan in the UK and to strengthen cultural, social and economic bonds between the two nations. The building includes exhibition, event and workshop spaces, a library, a restaurant and a shop. Japan House London has captured the interest of the public with over 129,000 people visiting since it opened on 22 June 2018.

The Duke, who previously visited Japan in 2015, toured the building and learnt about how the space is being used to promote and expand links between Japan and the UK - including the Japan-UK Season of Culture that will take place between 2019 and 2020, bridging the 2019 Rugby World Cup held in Japan and the 2020 Tokyo Olympic and Paralympic Games. Throughout the Season of Culture, the British Council will lead a series of activities in Japan, whilst the Japanese government will lead on activities in the UK.

The Duke was introduced to Japanese and UK business leaders that are supporting Japan House London. 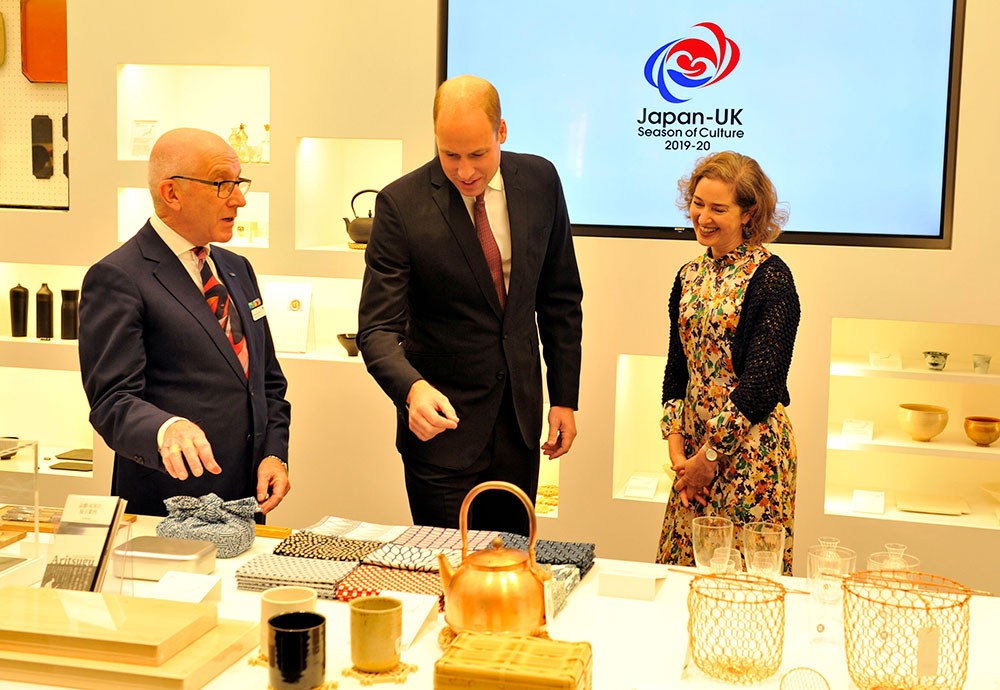 He started his visit in ‘The Shop’ that introduces Japanese products, the artisans who make them, and the history and social context in which they are used. The Duke learned about the Japanese monozukuri philosophy - craftsmanship, tied to the deeply rooted Japanese process of creativity, development and innovation. 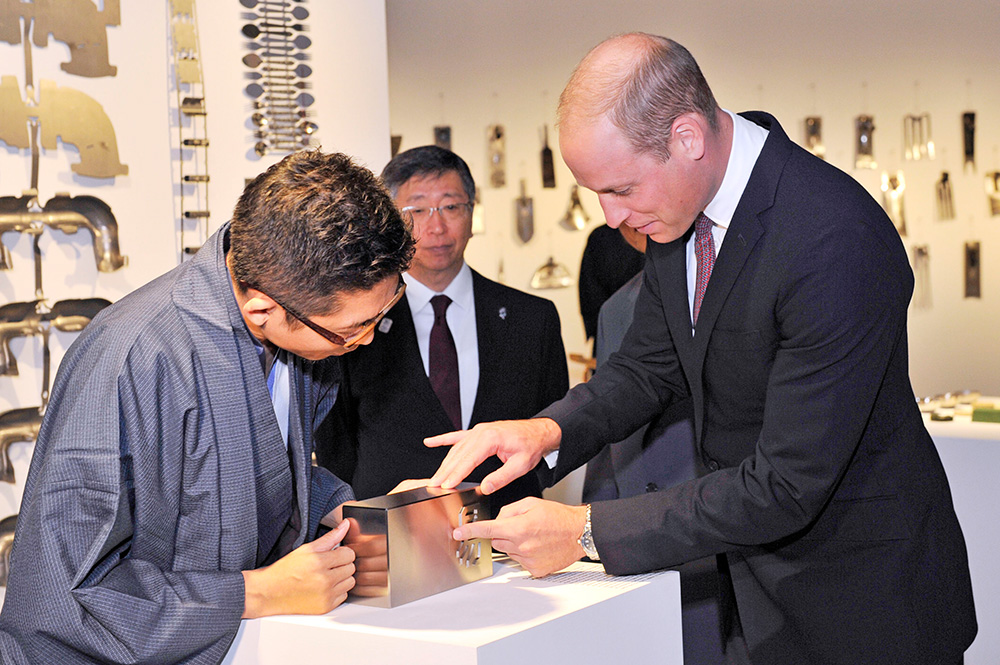 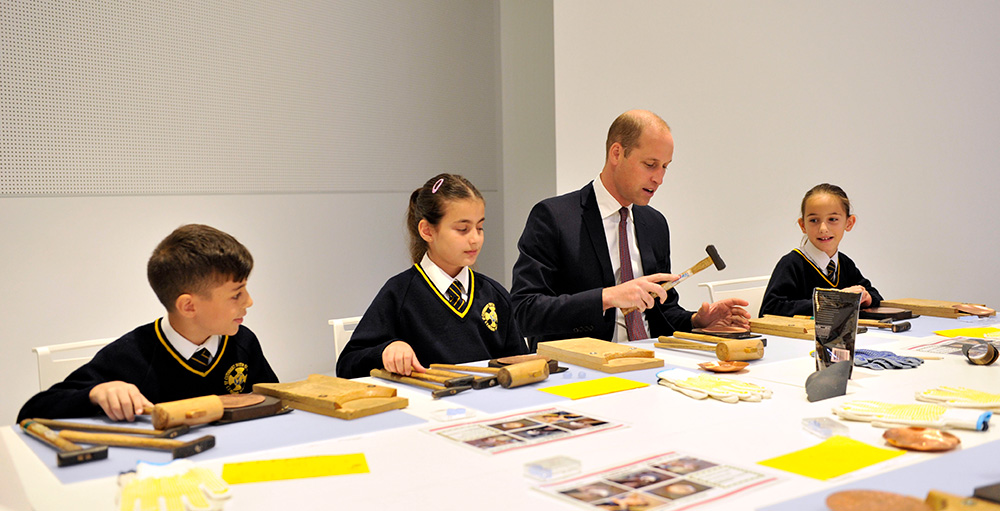 He learned about how Japan House London works with local schools to expand knowledge of Japanese culture and took part in a workshop with local school children on the craft of tsuiki (hammer cast) copperware in which objects are beaten out of a single sheet of copper. The workshop was led by Tamagawa Tatsushi a craftsman from the 200-year-old metal workshop, Gyokusendo in Tsubame-Sanjo. 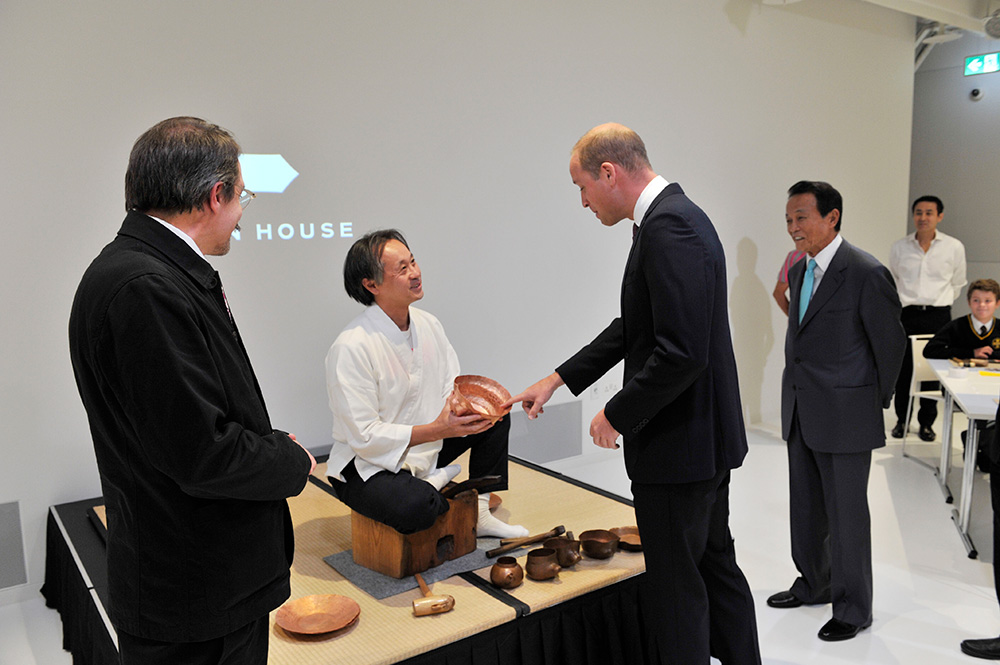 Mr Tamagawa’s father is a ‘living national treasure’ in Japan – a bearer of intangible cultural heritage. He showed His Royal Highness how to create a copper kettle using tsuiki skills that had been carefully passed down to him from his father from previous generations of their family since the late Edo Period (1603 – 1868). 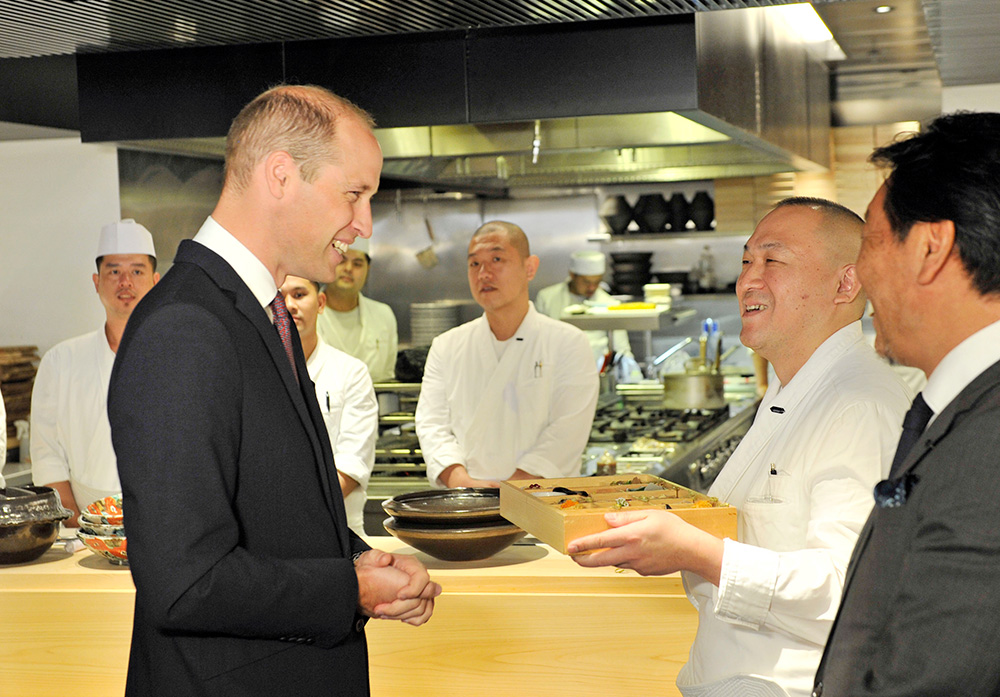 In Akira, Japan House London’s restaurant, Executive Chef Akira Shimizu, showed The Duke the kitchen with a robata grill from Japan and His Royal Highness enjoyed sampling sushi from Akira’s beautifully presented bento box, one of the restaurant’s signature dishes. He joined in with local children learning the art of using chopsticks, which is part of their wider work of learning about Japanese food and culture. 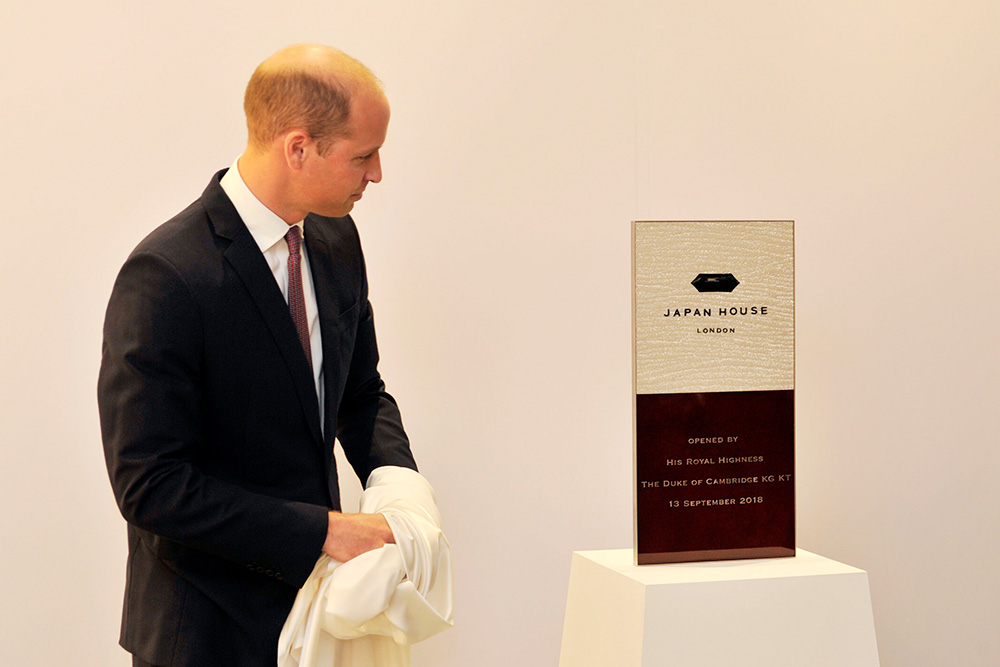 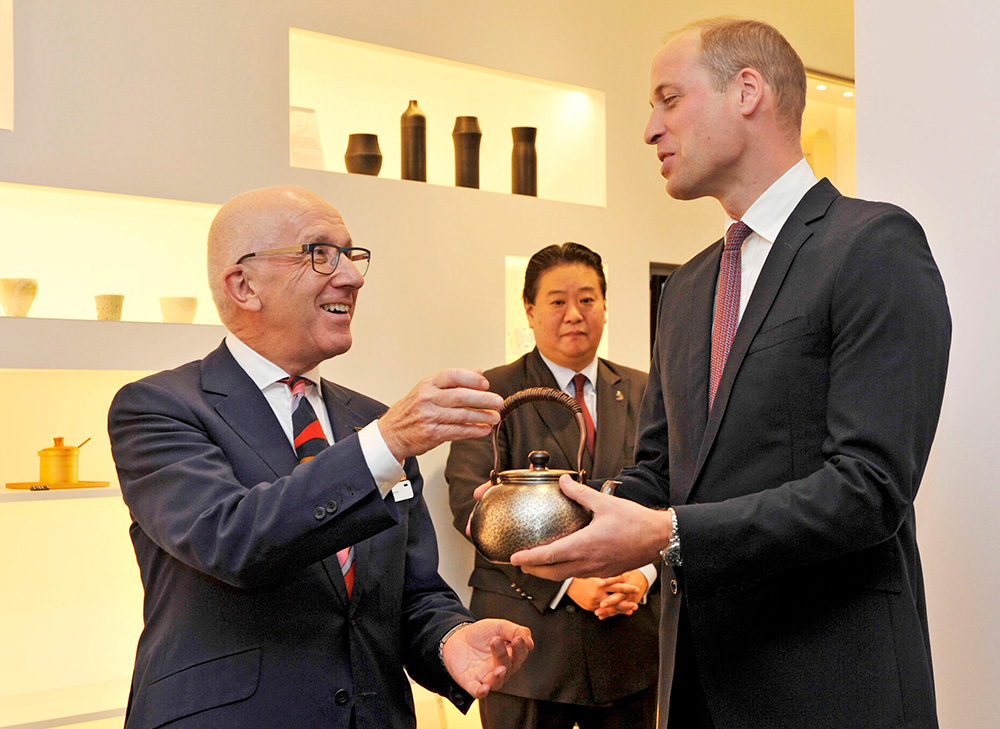 As a token of appreciation for his visit, Michael Houlihan, Director General of Japan House London, presented His Royal Highness with a tsuiki copper kettle created by Mr Tamagawa of Gyokusendo - similar to the one The Duke had taken part in producing during the visit. 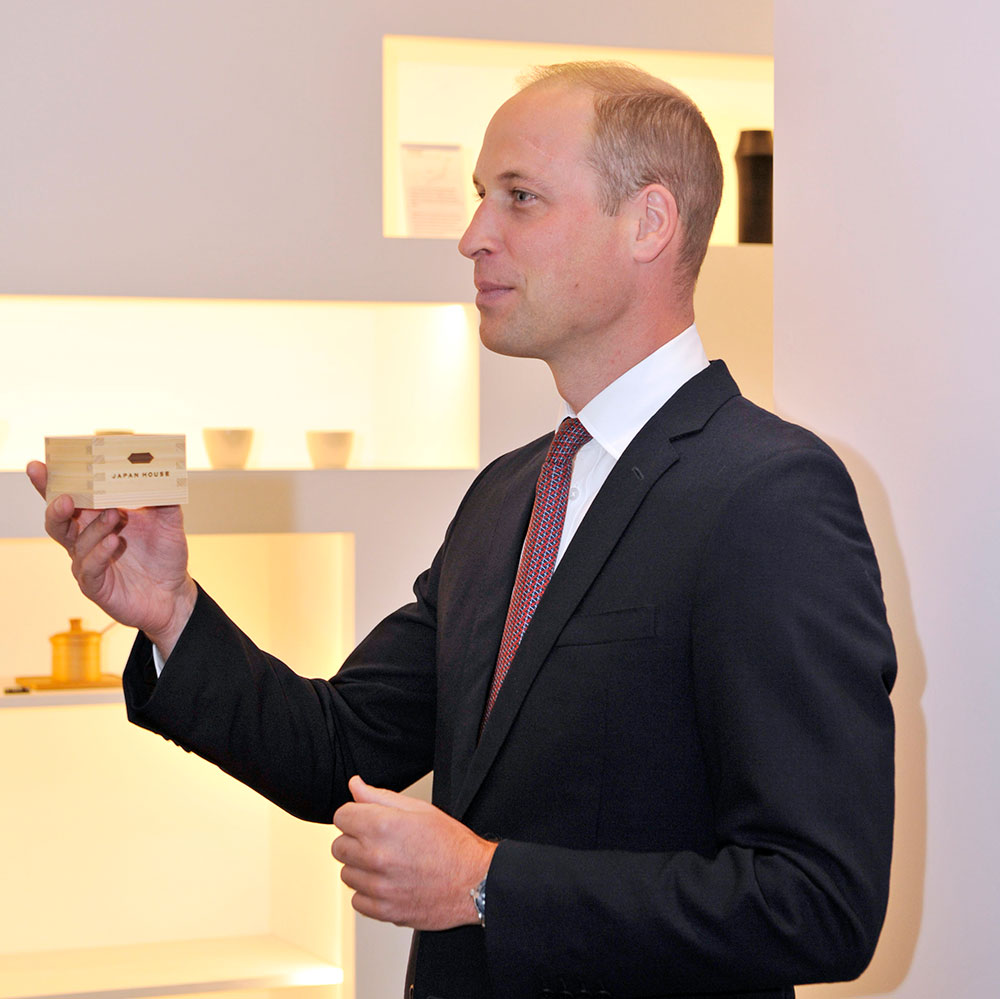 The Duke ended by inviting those present to join him in a kampai toast (a celebratory toast equivalent to ‘cheers’) - this comprised of a small serving of Fukugao sake from Sanjo City served in a masu, a square, wooden sake cup used on celebratory occasions.

Prince William, The Duke of Cambridge, gave a short speech in which he said: “This amazing building - Japan House London – is intended to be the bridge across which the best in ideas and creativity between the UK and Japan will flow. Here, we can build new and lasting relationships in culture, education and business and forge a better understanding of your wonderful country.”

Mr Taro Aso, Japan's Deputy Prime Minister said: “Japan House London will attract not only those interested in Japan, but also visitors, from all walks of life wanting to learn more about Japan. The Duke of Cambridge’s presence promises to enhance the magnetic power of this House.”

Mr Koji Tsuruoka, Ambassador of Japan to the UK, said: “Our goal is not simply to open Japan House London, but to make it the new epicenter for Japanese cultural engagement in the UK and to make it one of the cornerstones for deepening the Japan-UK relationship.”

Mr Michael Houlihan, Director General, Japan House London said: “Today, The Duke immersed himself in the richness of Japan’s varied culture - from its living craft tradition to cutting-edge design and food. Japan House extends the same invitation to everyone in the UK.”

Japan House London is part of a global initiative led by the Japanese Ministry of Foreign Affairs, there are two other Japan Houses in Los Angeles and São Paulo.

Images and film from the Royal Rota
This event was covered by the Royal Rota. To obtain please contact your usual supplier of Royal images and broadcast footage.

Press Images
Images of Japan House London including a selection from The Duke of Cambridge’s visit can be downloaded from: http://bit.ly/KallawayJHLpictures

Japan House London
Opened in June 2018, Japan House London is a new cultural centre offering visitors an experience of the best and latest from Japan. Located on Kensington High Street, with a floor area of over 2,000 sqm, it consists of three floors including a gallery space with a rotating programme of exhibitions, an events space, a library, a Japanese restaurant and an extensive social retail space. It provides a wide range of exhibitions, film screenings, performances, talks, workshops and more.

Japan House London aims to create a greater understanding of Japan amongst a UK audience, and to deepen cultural, social and economic bonds between the two nations, by inviting guests from all backgrounds and with a variety of interests to explore, interact with, and immerse themselves in Japan’s rich and diverse culture.

Established by Japan’s Ministry of Foreign Affairs, Japan House London is one of three around the world, with sister Japan Houses in Sao Paulo and Los Angeles.

The ‘Biology of Metal’ exhibition is inspired by Tsubame-Sanjo’s Kouba no Saiten, a unique example of using an “Open Factory” festival to regenerate local industry and foster regional revitalization through social enterprise. In 2017, the annual festival attracted over 53,000 visitors to the metal workshops and factories of Tsubame-Sanjo and contributed around £270,000 to the local economy. The sixth Tsubame-Sanjo Factory Festival will take place 4-7 October 2018. Other regional parts of Japan are also effectively using art and design festivals to raise their profile and revitalise regional economies.
Full press release about the ‘Biology of Metal' exhibition here: http://bit.ly/KallawayJHLBIOLOGY

Japan House London visitor numbers
In its first 11 weeks of operation, from opening to the public on 22 June up to 6 September 2018, Japan House London welcomed over 129,000 visitors. Drawing in the visitors over this period was the opening show in the Gallery, ‘SOU FUJIMOTO: FUTURES OF THE FUTURE’ in collaboration with Tokyo’s TOTO GALLERY • MA, exhibiting the work of one of Japan’s greatest contemporary architects for the first time in the UK.

Sake used for the toast
The Duke made a toast in Japanese with the word “kampai” (Japanese for “cheers”). The sake served was Fukugao Whisky Barrel from Fukugao sake brewery in Sanjo City. Fukugao Whisky Barrel is an innovative, complex product of a traditional sake brewery. A futsushu (table sake) yet with a rice polish rate of 60% which makes this sake extremely mellow and complex. The maturation in the whisky barrel (oak) makes this sake a unique flavour experience best enjoyed chilled or on the rocks like whisky.