KUMIHIMO: Japanese Silk Braiding by DOMYO - Tying together the threads of history 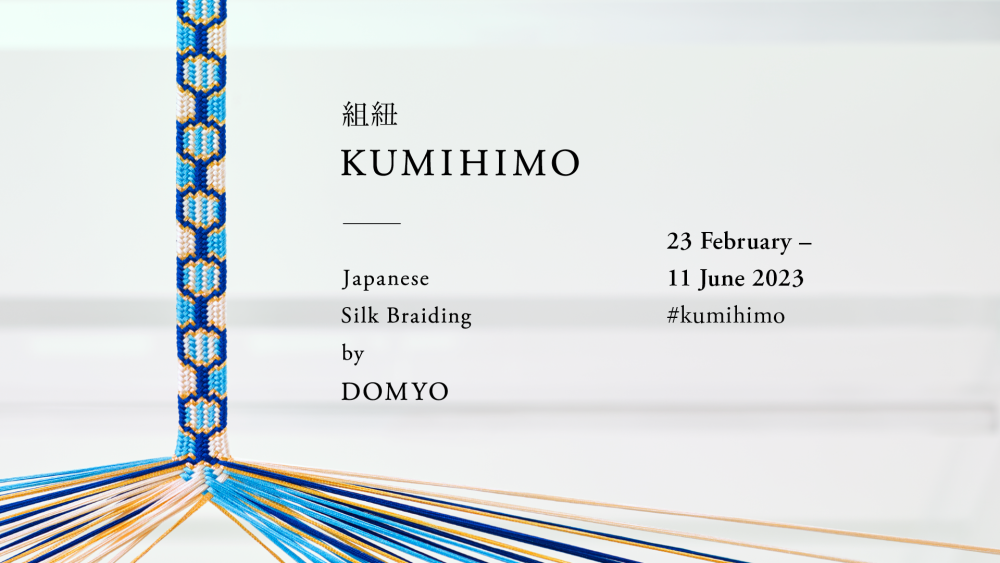 Japan House London presents KUMIHIMO: Japanese Silk Braiding by DOMYO, the UK’s first major exploration of this ancient yet contemporary Japanese art. Drawing together the strands of its fascinating 1300-year history, the exhibition also considers kumhimo’s vibrant current applications, from formal and contemporary fashion to science and engineering. The future of kumihimo is posed as an open question, asking the visitor to join in with the discussion on possibilities and potential.

Literally translating as ‘joining threads together’, kumihimo refers to braided cord from Japan. It is characterized by vivid colours and intricate patterns, and is created by expert craftspeople who combine up to 140 hand-dyed threads, often made of silk. The exhibition at Japan House London, the breadth and depth of which is a first for the UK, is produced by Yusoku Kumihimo Domyo (Domyo), a company located in the old shopping and entertainment district of Ueno in central Tokyo, which has been making braided silk cords by hand since 1652.

Kumihimo’s history is one of transfer of material culture. In 710 CE, Nara became Japan’s imperial capital, its location at the end of the Silk Roads positioning it as a point where Central Asian, Chinese, Korean and Japanese influences would converge. Silk braiding in Japan at the time was inspired by patterns and colours from the Asian continent. In the 9th century, braided silk cords were used in clothing worn by aristocrats, for binding and hanging scrolls and as religious decoration in temples and shrines. Designs evolved and took on a uniquely Japanese character, becoming more complex and sophisticated in the process.

From around the 10th century, it was the samurai classes who continued the tradition, using kumihimo to join together armour plating and as decorative ties for the scabbards of their swords. Today, however, many people in Japan will know kumihimo from its use as obijime – colourful cords which are tied on top of the sash, known as an obi, of a woman’s kimono. Less well known, either in Japan or abroad, are the contemporary applications of kumihimo, such as aircraft components, golf clubs and artificial limbs.

KUMIHIMO brings the story of Japanese braiding to life with floor-to-ceiling installations, absorbing videos, presentations of tools and processes and more than 50 different examples of the braids themselves, imaginatively presented throughout the gallery. These examples include cords made using historical designs, the originals of which are held in Buddhist temples and Shinto shrines as well as the Shōsōin Repository in Nara and are rarely, if ever, publicly displayed. The exhibition is complemented by a rich programme of events, including hands-on workshops which allow guests to try making kumihimo themselves.

The exhibition is divided into three sections:

“This exhibition invites the visitor to come closer and delight in the beauty of intricate detail. The continuation in Japan today of the centuries-old tradition of producing kumihimo is not only a respect for what has gone before, but also a story of how this art can survive and provide a source of inspiration for the future. The skills of dyeing and braiding silk are acts that support people’s livelihoods; this is about sustainable business in the modern world. Through this in-depth exploration of kumihimo, I hope that we can discover more about the ties that bind us rather than that which might keep us apart.”

“I am honored to have this opportunity to introduce kumihimo from Japan to the people of London. The technique of kumihimo, which has uniquely evolved in Japan over a period of more than a thousand years, expresses all manner of worldviews within a single thin, linear structure. I hope that visitors will get up close to kumihimo, study it carefully and get a real sense of its surprising complexity, delicacy and beauty.”

Book tickets for this exhibition

Japan House London is a cultural destination offering guests the opportunity to experience the best and latest from Japan. Located on London’s Kensington High Street, the experience is an authentic encounter with Japan, engaging and surprising even the most knowledgeable guests. Presenting the very best of Japanese art, design, gastronomy, innovation, and technology, it deepens the visitor’s appreciation of all that Japan has to offer. Part of a global initiative, there are two other Japan Houses, one in Los Angeles and the other in São Paulo.

DOMYO is a Tokyo-based producer of kumihimo, established in 1652. Using centuries-old techniques, its aim is to create products that will be used by people all over the world and the company’s product range includes everything from obijime to earrings and bow ties. While other companies have mechanized their braiding processes, skilled craftspeople at DOMYO continue to braid by hand, and each silk thread used in their kumihimo is also hand-dyed in house.