This family-friendly exhibition showcases the life’s work of prolific storyteller and award-winning illustrator, Anno Mitsumasa, who has been producing picture books and imaginative paintings for over 50 years. The exhibition includes almost 100 artworks by Anno in a variety of media from watercolours, Japanese-style paintings (Nihonga), powder pigment (ganryō) on silk, and papercuts. This exhibition marks the first ever display of Anno’s work in the UK. 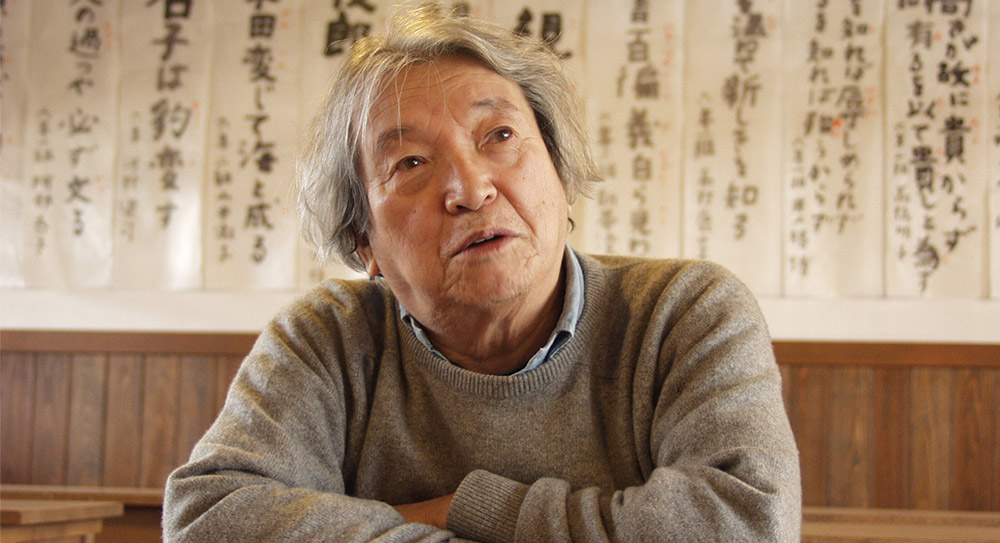 Anno was born in 1926, the first year of the Shōwa era, in the small town of Tsuwano in Shimane Prefecture in western Japan. He trained as a primary school teacher in Yamaguchi and work for a number of years in Tokyo before becoming an illustrator, mostly of children’s book. Generations of readers in Japan have grown up reading his books as if they were a part of the family.

His very first picture book was ‘Mysterious Pictures’, published in 1968. In Europe he found a book containing works by the Dutch artist M. C. Escher (1898-1972). This proved to be the inspiration for Anno to depict his own world where fantasy becomes reality, a world which is distorted, reflected or turned upside down. 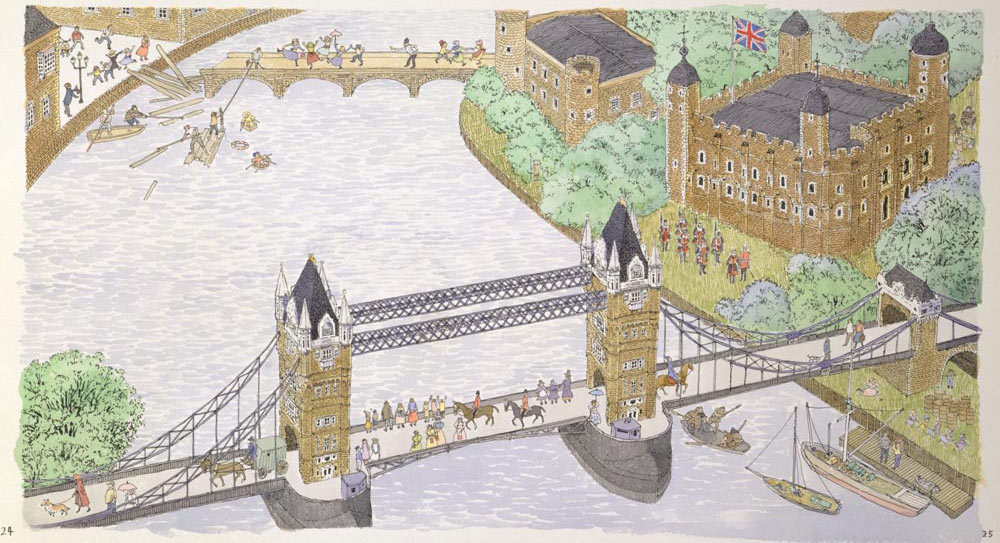 ‘Anno’s Journey’, which depicts a small figure journeying through the cultural and literary landscapes of countries in Europe, followed in 1977 to great success. Each of the nine stories in the ‘Anno’s Journey’ series explore the folklore, history and art of the country, revealing Anno’s deep sense of curiosity and his extensive knowledge of cultures from around the world.  The full set of drawings for ‘Anno’s Britain’, which depicts scenes from London, Windsor, the Cotswolds and beyond, are on display and visitors are invited to participate in a treasure hunt to find famous places and characters hidden among the detailed British landscapes. Other countries in the series, including Japan, Spain, Denmark, China, Italy and the USA are available to enjoy in the Gallery’s reading area. 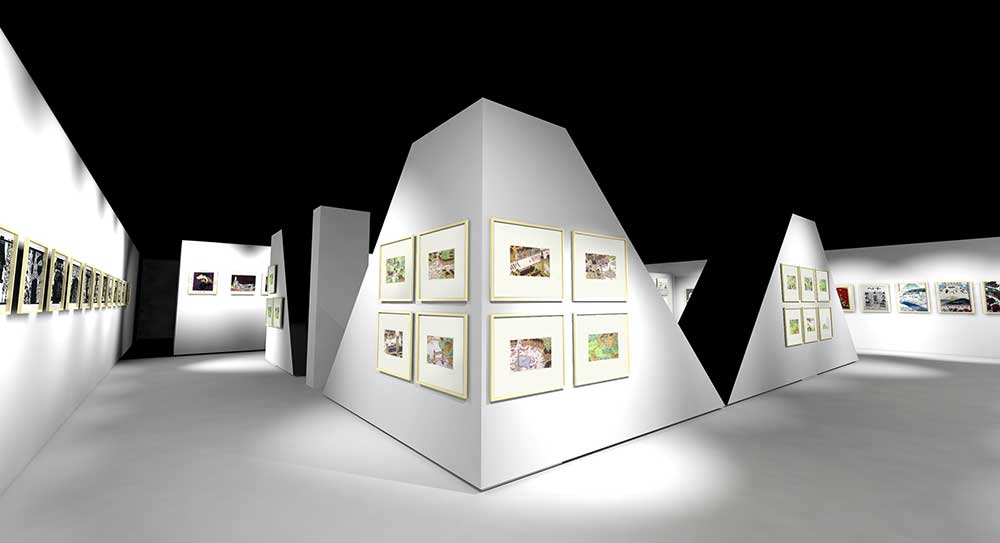 Concept image of the Anno's Journey exhibition at Japan House.

Working with ink and watercolour as well as papercuts, Anno’s stories cover a wide range of themes - from maths and science through to language and folklore. His picture books show a profound understanding of the way children’s minds work, presenting complex subjects in engaging, easily understandable ways. Young readers are often required to interact with his books beyond the simple act of reading, with tactile and mental puzzles requiring books to be turned around or studied intently to find specific objects within the detailed drawings. These playful forms are considered precursors to the puzzle-style books made popular by titles such as ‘Where’s Wally?’ In 1984 this sophisticated style, filled with humour and visual trickery, won him the prestigious Hans Christian Anderson award for his lasting contribution to children’s literature. 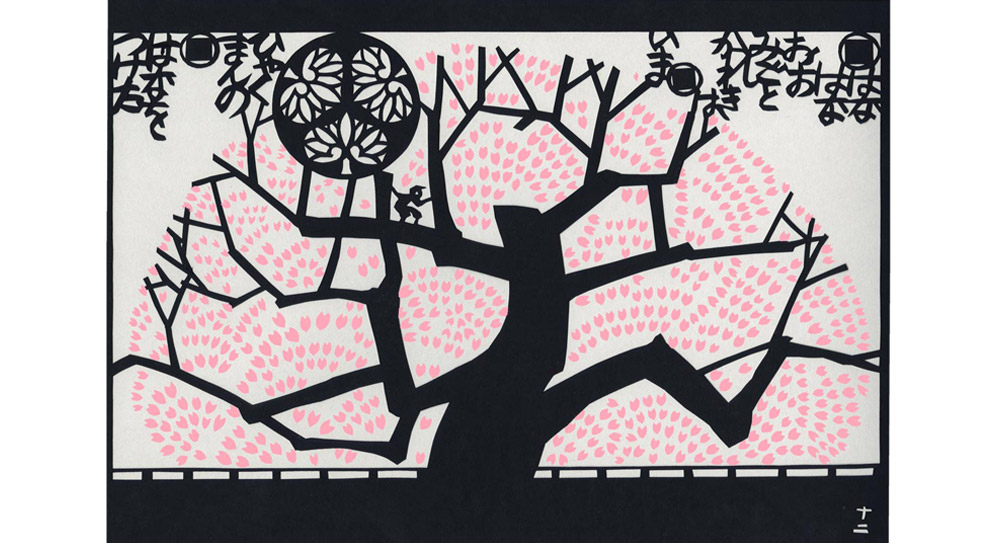 Scene 12 from ‘The Tale of the Old Man Who Made Trees Blossom’ © Anno Mitsumasa. Courtesy of Anno Art Museum.

The exhibits on display follow the story of Anno’s life’s work, showing his early papercuts and playful books for learning letters, through to his ‘The Tale of the Heike’ series about the struggle between feuding samurai clans during Japan’s 12th-century Genpei War (1180–1185 CE). Also included is ‘In and Around the Capital’ (Rakuchū Rakugai), a series of watercolours depicting scenes from Kyoto, in reference to the famous genre of screen paintings by the same name from the 16th Century. 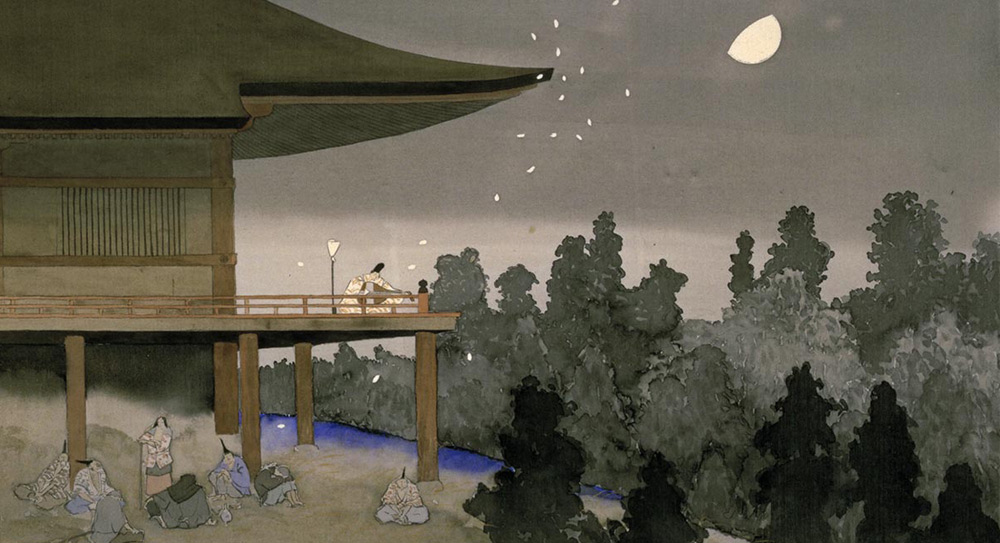 The Exiling of the Ministers of State from ‘The Tale of the Heike Picture Book’ © Anno Mitsumasa. Courtesy of Anno Art Museum.

An accompanying exhibition taking a closer look at the works from the series ‘In and Around the Capital’- on loan from Mori no naka no ie, Anno Mitsumasa Art Museum, Wakuden in Kyoto – is on special display at the Embassy of Japan until 26 September 2019. 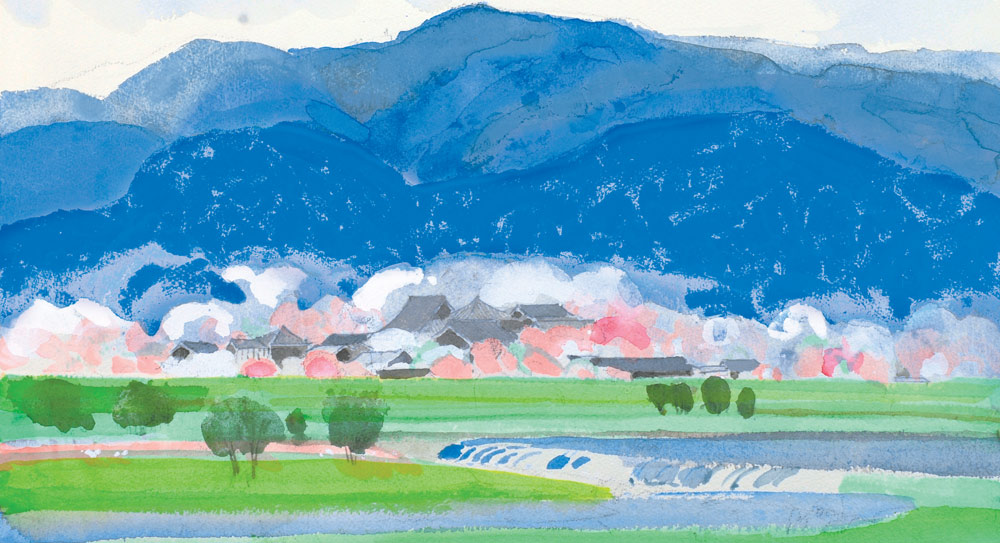 Hōrin-ji, Arashiyama from ‘Views In and Around The Capital’ © Anno Mitsumasa. Courtesy of Mori no naka no ie, Anno Mitsumasa Art Museum, Wakuden

The design of the exhibition at Japan House references Anno’s hometown of Tsuwano, resembling the undulating hills and valleys in this rural area of Japan; scenes Anno has so often depicted in his work. Amid the displays, young and old readers alike can find refuge from the wider world in a reading cove – a quiet space in which to sit down and travel the world with Anno’s picture-book tales.

Taking place in time for the UK school summer and autumn half-term holidays, the exhibition at Japan House showcases 87 of Anno’s works, revealing something of the illustrator: his keen sense of play, his curiosity and love of puzzles, as well as posing a broader reflection on Shōwa-era and Heisei-era Japan. The exhibition invites readers of all ages to recall, or even discover for the first time, the exquisite joys of picture books and imaginative storytelling. The Anno’s Journey: The World of Anno Mitsumasa exhibition at Japan House, as well as the accompanying display at the Embassy of Japan featuring pieces from ‘In and Around the Ancient Capital’ are free to visit.

Images are available to download here. Please note the credits in the title of each image.

Anno's Journey: In and Around the Ancient Capital runs from 22 August - 26 September 2019 at The Embassy of Japan. Admission is free, but photo ID is necessary to gain entry to the Embassy. Open Monday to Friday 09:30 - 17:30, closed weekends.
Location: The Embassy of Japan,101-104 Piccadilly, London W1J 7JT
Website: www.uk.emb-japan.go.jp

A Taste of the Exhibition at Akira
Immerse yourself in the Anno’s Journey exhibition by tasting the flavours of where Anno’s own journey began. Akira restaurant at Japan House is pleased to introduce a dish using soba, a local specialty in Anno’s home prefecture of Shimane. Enjoy kamo nanban soba, buckwheat noodles served in a warm dashi and soy sauce broth, topped with duck breast (kamo), grated daikon radish and spring onions. The special noodle dish is available at Akira restaurant throughout the exhibition (22 August – 27 October 2019).

About Anno Mitsumasa
Since the 1960s, Anno has illustrated hundreds of books. His works have appeared in children’s publications for over 50 years and each new generation of readers in Japan has grown up intimately knowing his works as if they were a part of the family. The pieces he has created throughout his life reflect the socio-economic evolution of Japan through the Shōwa and Heisei eras. These include scenes from his childhood in rural Japan before WWII, the post-war economic miracle of the 1960s and its increasingly outward-looking perspective on the world and interaction with Europe, through to collections of paintings which predominantly explore depictions of Japan. He was awarded the Hans Christian Andersen Medal in 1984 for his lasting contribution to children's literature and has been designated a Person of Cultural Merit in his home country. 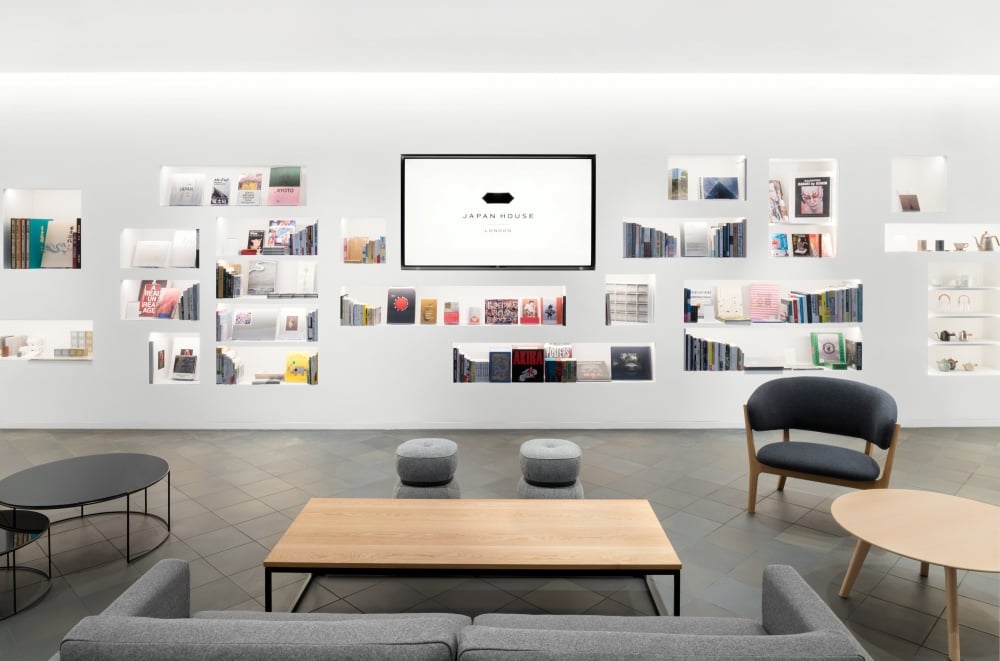 Anno's Journey is organized and curated by Japan House London with the kind cooperation of the artist, and in collaboration with Sankei Shimbun Co., Ltd.