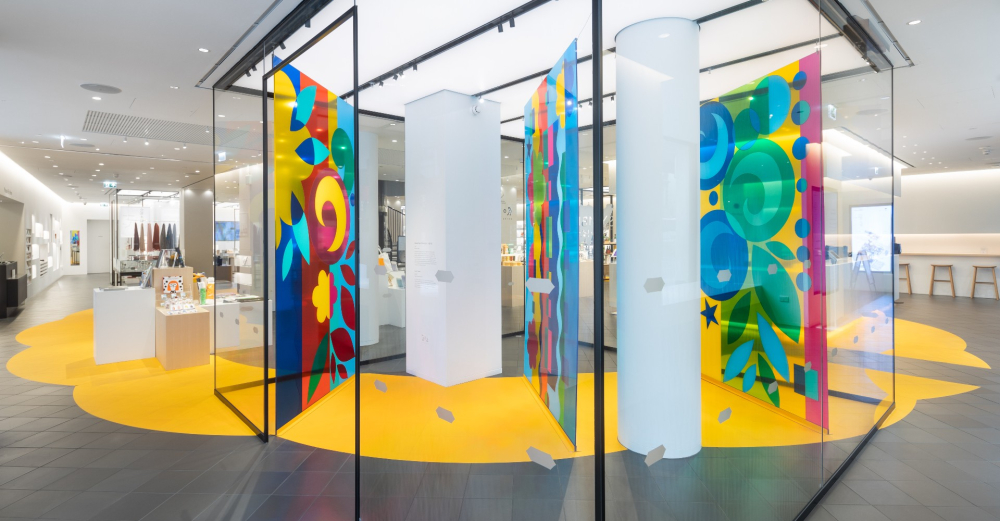 The current installation on the Ground Floor of Japan House London, part of the Symbiosis: Living Island exhibition.

Opened in 2018, and formally inaugurated by HRH Prince William, Duke of Cambridge, later the same year, Japan House London has since hosted 13 exhibitions highlighting the works of Japan’s leading creative experts from well-known names such as architect Sou Fujimoto and Manga artist Urasawa Naoki, to lesser-known but equally highly skilled craftspeople such as the metal workers of Tsubame-Sanjo.

In addition to exhibitions, the team at Japan House London has also delivered 579 events to date, including talks, performances, screenings and workshops, on topics ranging from Buddhist and Shinto traditions to space exploration, manga, regional industrial heritage and Japanese textiles.

With a series of lockdowns to navigate during 2020 and 2021, Japan House London successfully adapted to a more virtual, cultural world by satisfying an ever-expanding online audience with regular events (many streamed from Japan), virtual exhibitions and the creation of original digital content such as its ‘Essentials of the Japanese Kitchen’ series. In defiance of the challenges presented by the pandemic, in its four years on Kensington High Street, Japan House London has welcomed almost 1.2 million visitors, 94% of whom say they have learnt something new about Japan or Japanese cultures during their visit.

The past year has seen an exciting return to in-person exhibitions, including the current exhibition Symbiosis: Living Island, which runs until 4 September 2022. Through architectural models, video, installations and scale diorama of the island, visitors experience the success of an extraordinary living art project that uses art to transform landscapes and lives.

In-person events are also firmly back on the agenda, with online audiences from all over the world still being welcomed through live streaming. The team at Japan House London is thrilled to again welcome experts and artists from Japan, and indeed the rest of the world, to lead these events. For example, to mark the opening of Symbiosis: Living Island, the exhibition’s creators – renowned art curator Hasegawa Yuko and Pritzker Prize-winning architect Sejima Kazuyo - made a special trip from Japan to deliver a fascinating programme of talks and events. The team was also delighted to host a visit by Japan’s Prime Minister, Kishida Fumio, in May

“It gives me great pleasure to celebrate Japan House London’s fourth anniversary today. Having overseen this project from the very beginning, I am immensely proud of what the team has achieved over the past four years. Throughout my career in the cultural industry, I have seen the transformative power that cultural understanding can have on people’s lives. It is my hope that Japan House will continue to educate, inspire, and touch the lives of its visitors for years to come.”

Japan House London is the cultural home of Japan in London. Located on Kensington High Street, the experience is an authentic encounter with contemporary Japan, engaging and surprising even the most knowledgeable guests. Presenting the very best of Japanese art, design, technology and cuisine through exhibitions, events, retail and gastronomy, Japan House London is committed to telling stories from Japan. Part of a global initiative led by the Japanese Ministry of Foreign Affairs, there are two other Japan Houses, one in Los Angeles and the other in São Paulo.