Windowology: New Architectural Views from Japan, running from 1 December 2021 until 10 April 2022, explores the significance of windows beyond what may be considered their primary architectural function - to consider their everyday impact through architecture, photography, manga, craft production, and technology. 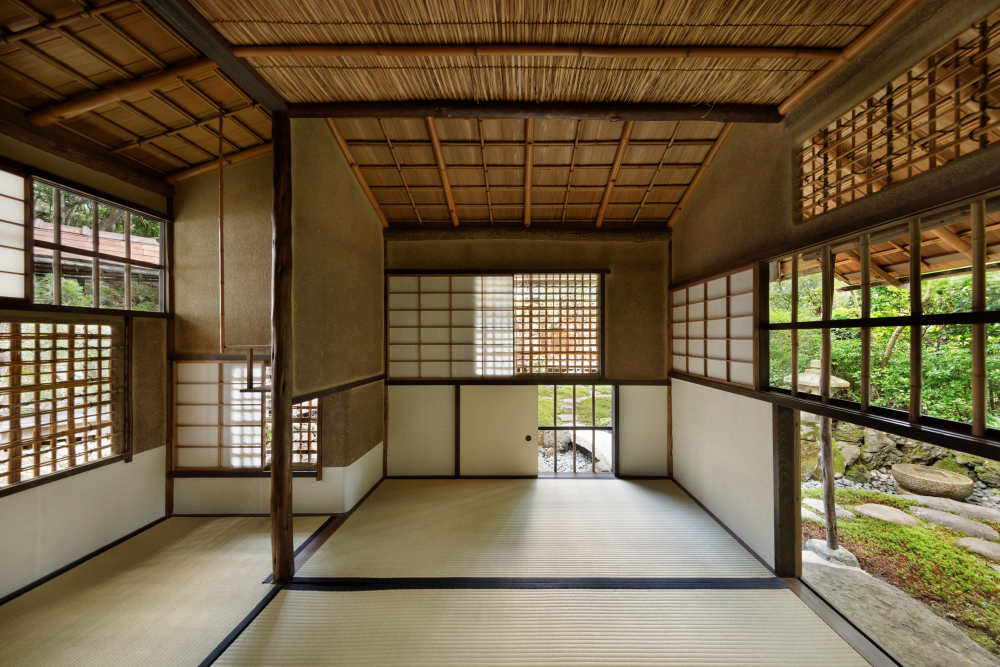 • Windowology: New Architectural Views from Japan shines a spotlight on the humble window, examining the impact they have on us every day.
• The exhibition explores the different perspectives on the world that windows offer us, considering the role of windows in disciplines such as architecture, film, craft manufacture, manga and motion.
• Visitors can walk through a full-scale replica of the 17th century architectural plan of Yōsuitei teahouse in Kyoto - also known as the Jūsansōnoseki (13-window sitting room) - renowned for having the most windows among all existing teahouses.
• Artist Tsuda Michiko creates a window-themed installation allowing visitors to Japan House inside, and visitors on Kensington High Street and Derry Street outside, to interact with each other, distorting the boundaries between the streetscape and the interior.
• Produced by the Window Research Institute, the only institution in the world dedicated to the research and development of windows, and leading architectural critic Igarashi Taro.
• Press Preview Monday 29 November; book your place here: [email protected]
• Press images available here

During the pandemic, for many, windows took on an entirely new meaning. They unlocked our creative and connective potential as hubs for communities to converse, artists to paint and even small businesses to thrive during lockdown.

This new-found appreciation is explored further in this multidisciplinary exhibition from Japan House London. Windowology: New Architectural Views from Japan, running from 1 December 2021 until 10 April 2022, explores the significance of windows beyond what may be considered their primary architectural function - to consider their everyday impact through architecture, photography, manga, craft production, and technology.

Curated by the Tokyo-based Window Research Institute, the only institution in the world focused on the study, design, use and impact of windows, and leading architectural historian and critic Igarashi Taro, this free exhibition looks at the ways in which windows frame our vision to give us unique perspectives on the world.

Core exhibition themes include:
• Windows on teahouses: Enter a full-scale replica of the 17th century okoshi-ezu (three-dimensional architectural plan) of Yōsuitei teahouse in Kyoto, constructed from washi (Japanese paper). Famous for its 13 windows despite its small size, each widow is designed to enhance the experience of the tea ceremony via the control of light and breeze.
• Windows on craft: Examine the central role windows play in the creation of Japanese crafts such as ceramics from Mashiko, indigo dyeing and washi from Matsue. Used as ‘working windows’, they bring in wind to dry materials, let out steam, allow items to be smoked or even trap heat – all processes integral to the creation of each craft.
• Windows on manga: Explore one of Japan’s most popular manga series ‘Sazae-san’. First published in weekly newspapers between 1946 and1974 and framed within a yonkoma manga (four-cell comic strip), the characters are often depicted sitting in a typical Japanese house, communicating with other characters via neighbourhood windows.
• Windows on how we live now: Discover the works of photographer Jérémie Souteyrat. Interested in the different architectural concepts of windows in Japan, his works highlight how urban windows are carefully positioned in response to sightlines in the surroundings, while rural Japanese homes are often built to capture the natural environment.
• Windows on storytelling: Famous windows in fiction are often used as a place of exchange, a means to indicate separation or even an entrance to another world. The exhibition explores the role of windows in famed Japanese literature throughout the ages, and what this age-old literary device has come to represent.
• Windows on film: Japanese timber-based architecture uses window-like components known as shōji (sliding translucent screens) and fusuma (sliding partitions) to create entirely new spaces. A short film on Kikugetsutei – a Japanese teahouse in Kagawa Prefecture – is available to view, revealing, through the rearrangement of ‘window’ spaces, the different ways in which a Japanese building can be completely transformed over a period of 24 hours.
• Windows on the environment: The role of windows in relation to the environment is constantly developing, and Japan is leading the way in creating sustainable architecture. As our interaction with nature becomes increasingly central to building practice, the exhibition explores the way heat, light and wind behave around windows in Japanese houses.

Interactive window installation
A site-specific installation by artist Tsuda Michiko is available to view on the Ground Floor. The piece focuses on the relationship between Japan House London, Derry Street and Kensington High Street - to create an installation within and around the building’s windows using camera footage, mirrors, and frames. Blurring the line between past and present, window frames with mirrors and screens reflect images of gallery visitors, inviting them to peer inside to catch a glimpse of themselves.

By distorting the boundaries between the streetscape and interior and projecting visitors’ images into unexpected places, the piece is designed to alter perception of space and create a labyrinthine visual experience. This is part of the Window Research Institute’s exhibition project of window-themed work by artists.

Igarashi Taro, Director of the Windowology exhibition said: “Now more than ever, windows play a vital role in connecting us with each other and our wider communities. Allowing us to see the world outside as well as in, windows are intimately linked to our everyday lives and physical actions. The Japan House London exhibition presents an opportunity for us to introduce our work on Windowology research from Japan, and to showcase the wider cultural significance of the window across all cultures.”

Simon Wright, Director of Programming, Japan House London said: “Hopefully this is a new experience for all: Windowology offers a glimpse into the purpose and meaning of windows in Japan. From teahouse design through to the ‘working windows’ of craft workshops throughout the world, we hope this exhibition shines a spotlight on this often-overlooked element of architecture, and for visitors to explore the many ways in which windows impact their everyday lives and to open our eyes to the potential of different perspectives.”

Media Information and Press Contacts
Press Images: https://www.japanhouselondon.uk/media-centre
Press Preview: Takes place at 10:00am on 29 November 2021, including a tour with Director of Programming Simon Wright, book your place via [email protected]

About the Window Research Institute
The Window Research Institute is an incorporated foundation based in Tokyo dedicated to the development of architectural culture. The Institute advances knowledge concerning windows and architecture, through research grants, publications, and public events. The research project ‘Windowology’ was launched by the Institute based on the belief that “windows represent civilization and culture”. Over the past 10 years, the institute has been accumulating research findings through conducting collaborative studies with universities and researchers both in and outside Japan. For more information, please visit the website: https://madoken.jp/en/
Facebook | Twitter | Instagram

About Japan House London
Japan House London is a cultural destination offering guests the opportunity to experience the best and latest from Japan. Located on London’s Kensington High Street, the experience is an authentic encounter with Japan, engaging and surprising even the most knowledgeable guests. Presenting the very best of Japanese art, design, gastronomy, innovation, and technology, it deepens the visitor’s appreciation of all that Japan has to offer. Part of a global initiative led by the Japanese Ministry of Foreign Affairs, there are two other Japan Houses, one in Los Angeles and the other in São Paulo.

About Igarashi Taro, Director of the Windowology exhibition
Igarashi was born in 1967, in Paris. He graduated from the Tokyo University School of Engineering’s Department of Architecture in 1990. He completed his Masterʼs degree at the same university in 1992 and he now holds a Doctorate from the University of Tokyo. He currently serves as a professor at Tohoku University’s graduate school. He was the artistic director for the Aichi Triennale 2013, and the commissioner for the Japan Pavilion at the 11th Venice Biennale. Igarashi received the Newcomerʼs Award as part of the 64th Art Prize of the Agency for Cultural Affairs.

About artist Tsuda Michiko
Tsuda has persistently examined the volatility of human perception⁠—and the glimpse of the richness of illusions afforded by that volatility—by manipulating our sensations in terms of understanding space and time. Tsuda’s works take a variety of forms such as installation, performance, and video implying an invisible presence wavering in response to the appreciator’s perspective and behavior. In recent years, performs as a unit “baby tooth” with Megumi Kamimura. In recent years, performs as a unit “baby tooth” with Megumi Kamimura. Her installation work “You would come back there to see me again the following day." has received the New Face Award at the 20th Japan Media Arts Festival in 2017. Exhibitions include the solo show "Trilogue" (TARO NASU, Tokyo, 2020), "Observing Forest" (zarya contemporary art center, Vladivostok, 2017) and the group exhibition “Inter+Play: Arts Towada 10th Anniversary Exhibition Part 1” (Towada Art Center, Aomori), "Aichi Triennale 2019", "Roppongi Crossing 2019: Connexions" (Mori Art Museum, Tokyo, 2019). She completed a Doctoral Program in Film and New Media Studies at the Graduate School of Film and New Media, Tokyo University of the Arts, in 2013, and received a grant from the Asian Cultural Council (ACC) for a 6-month residency in New York in 2019.