Browse and download images from The Carpenters' Line exhibition. 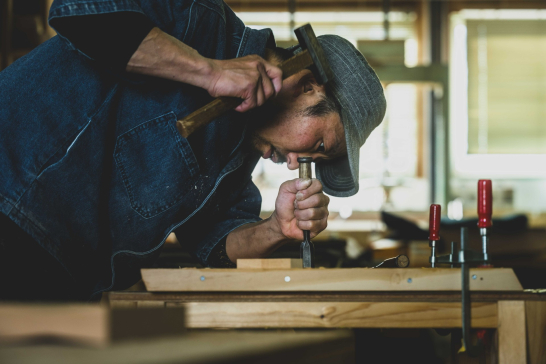 The exhibition celebrates the essence of Japanese craftsmanship through the story of an enduring woodworking heritage cultivated in the densely forested Hida region of Gifu Prefecture in central Japan. From the raw materials of the Hida forests and the tools developed to work them, to the involvement of Hida craftsmanship in global furniture design of today, visitors to the exhibition will be immersed in extraordinary craftworking legacy.

The city of Takayama in Gifu Prefecture has maintained a vibrant woodworking tradition for over 1,300 years, developing in that time an international reputation for its highly skilled carpenters. First recorded in the eighth century CE, the woodworking skills of these craftspeople were provided to the imperial capital in place of taxation, such was the importance placed upon the carpentry techniques originating in Hida. It was the extraordinary skill of these Hida craftspeople that built many of the famous shrines and temples still seen in the ancient capitals of Nara and Kyoto today.

Today, the practice of woodworking still thrives in Hida, with internationally renowned workshops well known for their collaborations with international designers, the results of which can be seen in museum collections across the globe.

Visitors to The Carpenters’ Line encounter a series of installations demonstrating the legacy of skill and innovation that runs as a continuous strand through Hida’s woodworking history, including:

From ichii ittō-bori, or sculptures carved from Japanese yew and mageki (wood bending), a vital element of contemporary furniture making, to latticework and masterful joining techniques, The Carpenters’ Line highlights the materials and techniques from this region of Japan, through video, displays, and a rich variety of exhibits.

The Carpenters’ Line will shine a spotlight on where centuries of tradition meet new technology, maintaining working lifestyles while adapting to new methods of manufacture. Hida boasts a design legacy of excellence that continues to this day as exemplified by makers such as celebrated furniture manufacturer Hida Sangyō.

For hundreds of years, products from Hida have embodied beauty and utility both in Japan and more recently further afield. Visitors to The Carpenters’ Line can admire delicate Hida-shunkei lacquerware, intricate kumiko latticework, and the culmination of several craft techniques in an example of a yatai. Yatai are large, ornate festival floats that are paraded around the town the spectacular Takayama Festival, which takes place twice a year in spring and autumn.

As the exhibition title suggests, the craftspeople of Hida are at the heart of The Carpenters’ Line. This exhibition shines a spotlight on the skills and lives of those people whose livelihoods have depended, and still depend, on working with the natural materials of their local environment. Visitors can connect with the people aurally by listening to the stirring medeta, a celebratory song sung by residents of the Hida region, as well as through soundscapes that allow the visitor to inhabit the world of the craftspeople.

“The fabled woodworking tradition of the Hida region of Japan – Hida no Takumi – continues to inform the present and future of industry and design in the area. The densely forested mountains which surround the city of Takayama have for generations continuously provided the gifts of nature which have helped maintain the livelihoods of its inhabitants. This heritage is a constant thread throughout the history of this region providing a respected woodworking lineage and our story for The Carpenters’ Line.”

The Carpenters’ Line runs from Thursday 29 September to Sunday 29 January 2023. Admission is free and booking is recommended. Visit the Japan House London website to book. A series of themed events and workshops will also accompany the exhibition, further details to be announced in the coming weeks. Please visit the website for more information.

Hida is a region of Gifu Prefecture in central Japan, consisting of three cities and one village: Takayama city, Hida city, Gero city, and Shirakawa village. Shirakawa is registered as a UNESCO World Heritage Site, with its steep, thatched-rooved gasshō-zukuri style of buildings. Surrounded by the rich nature of the northern Alps, including dense forests and 3000m high mountains, Hida is home not only to a long woodworking heritage, but also to mixture of cultures originating in Edo (present day Tokyo) and Kyoto, Japan’s old capital. The streets of Takayama City remain largely unchanged since the end of the 19th century, offering visitors the opportunity to experience the architecture of a bygone era.

Japan House London is a cultural destination offering guests the opportunity to experience the best and latest from Japan. Located on London’s Kensington High Street, the experience is an authentic encounter with Japan, engaging and surprising even the most knowledgeable guests. Presenting the very best of Japanese art, design, gastronomy, innovation, and technology, it deepens the visitor’s appreciation of all that Japan has to offer. Part of a global initiative led by the Japanese Ministry of Foreign Affairs, there are two other Japan Houses, one in Los Angeles and the other in São Paulo.