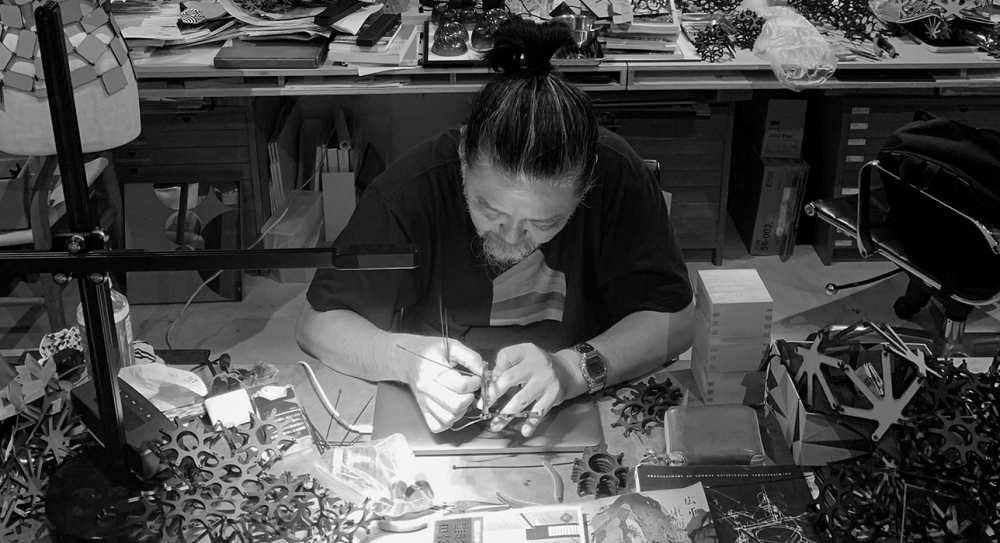 Tokolo Asao is an interdisciplinary artist, designer and educator whose work came to international attention when his graphic artwork Harmonised Chequered Emblem was selected to represent the Tokyo 2020 Olympic and Paralympic Games.

Tokolo is also a trained architect and a graduate of Tokyo Zokei University. He established a connection to London when he studied at the Architectural Association School of Architecture (AA) under the artist and architect Egashira Shin, with whom he undertook an apprenticeship before founding his own studio in 2001.

Tokolo’s mastery of numerous and diverse subjects, including mathematics, architecture, design, fashion and art, is reflected in the interdisciplinary nature of his practice. His various works and collaborations include carpet design for United Cinemas in Maebashi in 2007, Issey Miyake’s Bao Bao range of bags in 2008 and 2015 and three-dimensional façades for buildings such as F-town Building in Sendai in 2007 and the Education Center at Kogakuin University in 2012. One of his most popular product designs is the Tokolo Pattern Magnet which uses the Japanese karakusa (lit. ‘Chinese grass’) pattern. The square and triangular magnet tiles can be used individually or joined together to create endless design possibilities. The magnet was selected to be part of the Japanesque Modern Collection, a Japanese government-supported selection of innovative Japanese products, in 2006. In 2016, Tokolo began working with ceramics for the first time in the famous ceramics town of Arita in Saga Prefecture, incorporating his designs into dishes and tiles.

In 2016, Tokolo’s artwork titled Harmonised Chequered Emblem was unveiled as the winning design for the Tokyo 2020 Olympic and Paralympic emblems out of 14,599 entries submitted to a public competition. The design is composed of a connecting sequence of three types of rectangular shapes that form the tessellated circular and U-shaped patterns of the Olympic and Paralympic emblems. The three varieties of rectangular shapes represent different nationalities, cultures and ways of thinking coming together, conveying the message of “Unity in Diversity”. Tokolo created both emblems to be of the same size and volume – each is made up of a total of 45 rectangles – as an expression of equality. The design makes elegant and subtle references to Japanese traditions: the historical chequerboard pattern, ichimatsu moyо̄, was popular in Edo-period Japan (1603-1867 CE), while the use of the vivid indigo blue, ai, alludes to Japan’s history of indigo dye production.

Sketches of the Tokyo 2020 Olympic and Paralympic Games emblems, designed by Tokolo Asao. Image: Tokolo Asao 2019
The emblem was featured in the Tokyo 2020 Olympics Opening Ceremony, in a drone light show above the Olympic Stadium, on 23 July 2021, and demonstrated the geometric varieties inherent in the design with the movement of its rectangles.

Tokolo has been creating work that explores the theme of tsunageru, ‘to connect’, since being moved by the tragic events of 11 September 2001 in the United States. By connecting different elements such as simple geometric shapes and curved lines into patterns, he aims to reflect the harmony he wishes to see in the world. Though many of his works are devised using mathematical logic, they can be re-created using just a compass and a ruler. The resulting designs are translated into versatile two-dimensional and three-dimensional works of art, design and architecture in a variety of media including ceramics, urushi (lacquer), woodwork, Edo kiriko cut glass and canvas prints, many created in collaboration with expert Japanese craftspeople. In more recent works, Tokolo has also been experimenting with the rich range of shades of the colour ai (Japanese indigo) also known as ‘Japan blue’.

Tokolo Asao at work in his studio. Photo by Tsuruoka Shintaro

In 2016, Tokolo was commissioned to design his first ever ceramic dishes, using a medium he had not worked with before. The commission was followed by an exhibition proposal from the Kyushu Ceramic Museum. Tokolo was invited to explore new possibilities for Arita ceramics made in the town of Arita, where porcelain was first produced in Japan over 400 years ago. The artist worked with local potters to produce new works with a particular focus on the colour blue, which characterized early Arita ware until mid-17th century CE. With these potters, Tokolo mixed glazes containing various concentration levels of cobalt, producing dishes and tiles that demonstrate a vast range of shades of blue. The artist also experimented with centrifugal force to apply decoration. The exhibition [ ARITA X TOKOLO ] was shown at the Kyushu Ceramic Museum in the autumn of 2019.

Over the past 20 years, Tokolo has held teaching positions in subjects as diverse as fashion and architecture at the prestigious Musashino Arts University, Kuwasawa Design School, University of Tokyo and Tokyo Zokei University. His work has been exhibited in many high-profile art venues around Japan including 21_21 Design Sight in 2015, Aomori Contemporary Art Centre in 2016 and The Kyushu Ceramic Museum in 2019. A sample of Tokolo’s work is now on display across all three floors at Japan House London until 16 November 2021, as well as a new creative street crossing on Kensington High Street specially designed by the artist. The selection of works includes 100 patterns printed on canvas on the Lower Ground Floor, an original Tokyo 2020 art poster, ceramics such as tiles, dishes, unusual decahedron cups, and laser-cut wood works presented on the Ground Floor.

See the exhibition Tokolo Asao [CONNECT] Individual and Group at Japan House London until 16 November 2021. A number of products created by the artist are also available in The Shop.