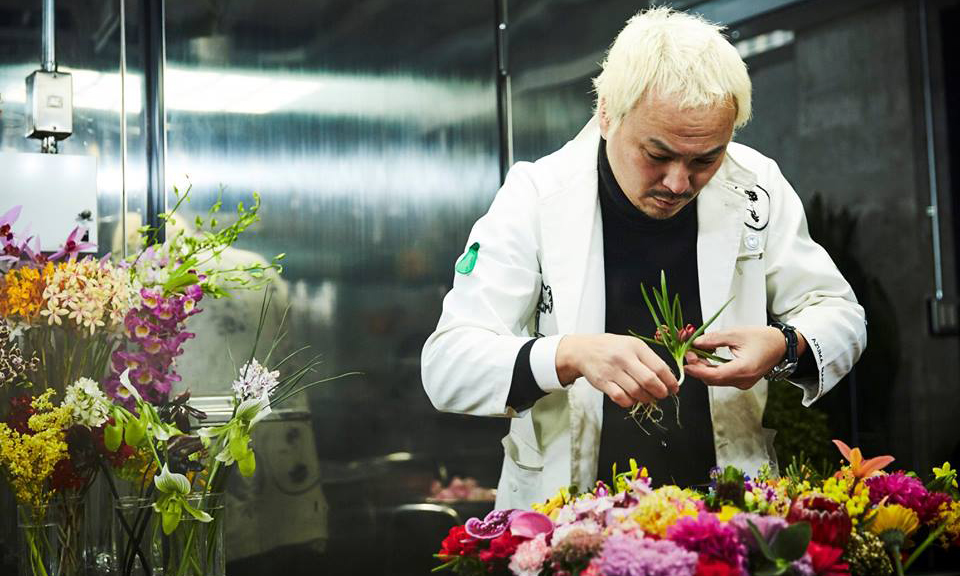 In his work, acclaimed flower artist and pioneer in the field of botanical sculpture, Azuma Makoto, investigates the life-cycle of flowers from the moment of planting through to decomposition, adding sensitivity to the ikebana tradition of listening to flowers. He believes that working with flowers should start early at dawn, when communication with flowers happens telepathically - in his concept it is important that a florist treats flowers with respect and devotion. Intricately elaborate and perhaps bizarre, his work is emotionally provocative. Generally recognised as ‘living art’, his work draws from the Japanese concept of mono no aware, which loosely translates as “attraction to things that fade”. This concept deals with the transcendent and somehow gothic sentiment of death. There is also a sense of transience accompanied by the gratitude of being present to witness this fleeting moment. Everything is temporary, and this is a call for us to be present in the moment.

Azuma (b. 1976, Fukuoka) moved to Tokyo in 1997 to pursue a career in music. While waiting for his music career to take off, he began working at the Ota Market, one of the Japan’s largest flower and vegetable markets, and an unexpected passion for botany started to grow. By 1999, this experience had led him to manage a boutique flower shop in Tokyo’s Azabu-Juban district and in 2002, he opened ‘JARDINS des FLEURS’, in collaboration with photographer Shiinoki Shunsuke. Azuma’s work began to evolve from a career as florist into an artistic practice in 2005 when he began exploring the concept of botanical sculpture; this continues to be an important element of his signature style. Today, ‘JARDINS des FLEURS’ is more than a flower shop or studio; it is a place where one finds the authentic, organic beauty from nature. It is a work-in-progress laboratory where the light, humidity, temperature and even the volume of the music are optimised with the only intent of looking after the well-being of flowers.

Azuma has transcended the traditional world of floral artists. With conceptual botanical sculpture, freezing multicoloured floral compositions, creating installations for brands like Hermes, working with fashion designers like Dries Van Noten, and even sending a 50-year-old bonsai and tree flower bouquets into space, he has experimented with the strength and power of flowers and plants when they face a hostile (or alien) environment like space, ice and fire. Despite critical environmental conditions, plants and flowers still burst with life, finding new expressions that even flowers or plants could never have imagined. The beauty of nature can now find new ways of communicating their organic forms through the artist’s work.

In celebration of the collaboration between Azuma Makoto and Japan House London, here is a selection of some of his works.

At an altitude of 30,000 meters and minus 50 degrees celsius, botany evolves into EXBIOTA – an extra-terrestrial life. While a pine tree bonsai confronts Earth’s horizon, a bouquet of flowers marches towards the sun. Free from everything, the plants can head to space. This is a botanical journey in space carefully documented by a camera. The full series is available on Azuma Makoto’s website.

Azuma Makoto’s works often play with the elements in nature: air, water (in all its form), and fire. A four-meter long sculpture of red Heliconia was installed on a raft used by local fishermen in the middle of the ocean around the island and was left floating at the mercy of the strong sunlight, wind and blown salted water. A vivid contrast between the muting nature of the flowers and the surrounding environment was recorded and documented on Azuma Makoto's website.

The third project of the series, ‘In Bloom #3’, is a bouquet of various flowers which was sent 2,000 meters deep into Suruga Bay, and observed using a remotely operated deep-sea exploration vehicle. In contrast to the bright summer daylight at the foot of Mount Fuji, the flowers are challenged to survive in the dark, with low sound, high sea pressure and surrounded by mysterious marine creatures. Using advanced Japanese technologies, the bouquet can reach the lower point of the abyss and touch the surface of the seafloor where the origin of life began.

Playing with elements and interpreting the muting of nature can have endless possibilities. This is another visually striking botanical sculpture set in ice by Azuma Makoto. The stalactites are created over time by pouring out water each time the temperature goes down at sunset. The water slowly becomes ice during the night, unveiling a new sculpture the following morning. Watch the full video of this project here.

These Flower Sculptures - composed by botanical artworks carefully stored in acrylic cases - gradually morph over the duration of the month-long exhibition. The transparent volume exposes the beauty and colours of flowers but also their fragile state, decadence and death with the passing of time.

These are two experiments on flower decomposition:
1) a large-scale installation assembled in an open field where Azuma explores the concept of reverse agriculture. On this occasion the flowers are deliberately planted with the intention of dying.

2) Enveloped in a large box, the flowers give up on the process of decomposition and the viewers are confronted with different life faces that end with the death of blossoms. This is a symbolic piece of art, referring to the Buddhist contemplation of life and death.

This exhibition features the changing aspect of flowers suspended, imprisoned and set within crystal-like blocks of ice. As the ice starts melting each blossom changes shape, exaggerated by the change in light and gravity.

For Japan House’s opening day, Friday 22 June 2018, Azuma created a version of Japan House San Paulo's ‘Flower Messenger’ especially for the streets of London. Inspired by flower sellers during Japan’s Edo period (1603-1867), a troupe of 30 flower messengers visited Kensington’s cultural institutions, including the Design Museum, the Natural History Museum, Royal Albert Hall and the Serpentine Gallery, on foot to meet their neighbours. Along the way, they greeted passers-by and presented them with flowers.
Azuma Makoto’s flower installation was also on view at Japan House from Friday 22 June until Sunday 24 June 2018.

Do you want to know more about Azuma Makoto’s approach? Watch our interview with Azuma and visit the artist’s website to see more of his works.