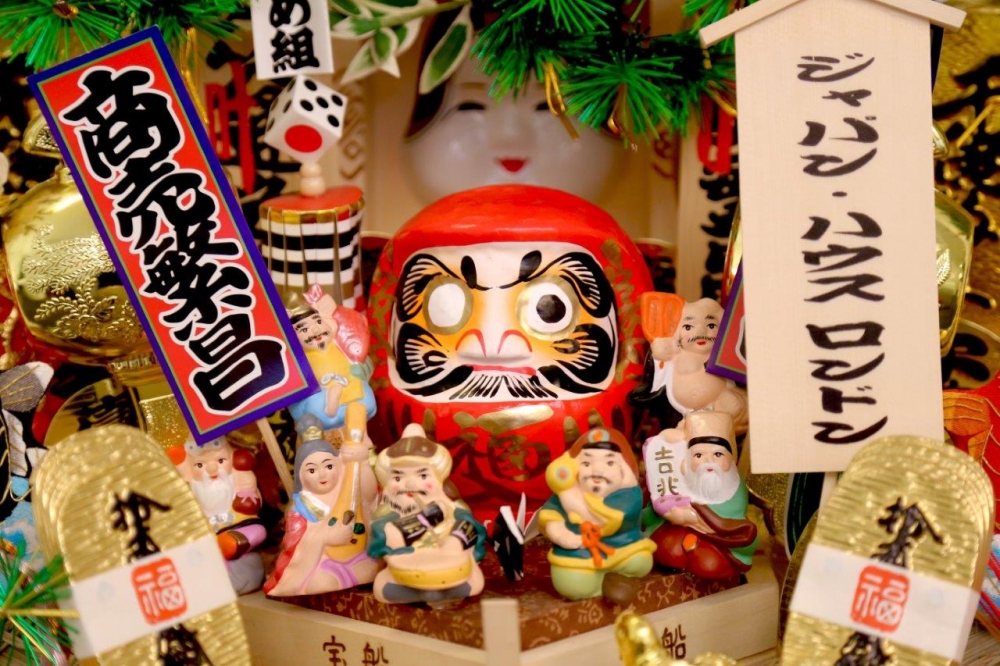 Kumade are ornamental bamboo rakes decorated with a variety of talismans, purchased to ‘rake’ or ‘sweep in’ good fortune for the New Year. The arrival of the New Year in Japan is rife with symbolism, and the purchase of kumade is no exception. Each of the separate talismans which make up these elaborate displays has its own particular meaning, designed to bring the owner prosperity for the year ahead. The size of kumade may vary from cup-sized ornaments to displays several metres high, and buyers are encouraged to increase the size of their kumade each year in order to reap ever-greater fortunes. Kumade are sold at Tori-no-Ichi - Rooster markets - which take place throughout Japan each November.

Japan House London had a kumade on display in January 2019. The component parts of the eye-catching kumade, and the ornament’s multi-faceted meanings, are explained below.

The white mask is that of the ever-smiling Otafuku, or Okame, sometimes referred to as the Goddess of Mirth.  Her names in Japanese are derived from a play on words of fuku, meaning luck or fortune, and kame, the word for a turtle which in turn represents longevity. She is believed to bring good fortune to those she marries. This mask is commonly used in comic kyōgen theatre.

A Daruma doll is another talisman of good fortune, and is often associated with the spirit of perseverance. It is a representation of Bodhidharma, the founder of Zen Buddhism who is reported to have sat in a cave for nine years without moving.

The dolls were originally designed to remain upright even when tipped, lending to the idea of always picking oneself up after knockbacks and carrying on to achieve a goal. Daruma may come in a variety of colours, though the most common is red - thought to ward off evil and bring good luck. The blank eyes of a daruma doll are painted in at two different points throughout the year; one eye at the beginning of the year when a wish is made, and the second at the end of the year, when the wish comes true. Regardless of the successes of its owner, daruma used in this way are commonly returned to temples towards the end of the year to be ceremonially burned. The kanji symbol painted on the chest of a daruma may vary, though often includes words related to good fortune. In this instance the daruma on display within the kumade at Japan House reads: fukuiri, meaning it contains good luck.

The ‘Three Friends of Winter’, taken from Chinese tradition, are pine, bamboo and plum blossom or Sho Chiku Bai in Japanese. These plants do not wither during the cold months and together they symbolize steadfastness, perseverance and resilience: the pine tree lives long, the bamboo grows straight and vigorously while the plum blossoms appear even when there is snow on the ground and is the first tree to bear flowers in spring. They appear together in many forms of New Year decoration.

Tai – the Japanese word for sea bream – forms the final part of the Japanese word omedetai, meaning auspicious or celebratory. This fish is therefore associated with times of luck and good fortune. Ebisu, the Japanese God of Luck, is often depicted with a freshly caught sea bream under his arm. This fish’s red colouring is another reason for its association with good luck.

The crane and turtle are often seen together as symbols of longevity. The phrase ‘tsuru sen-nen, kami man-nen’, means ‘the crane lives 1,000 years, the turtle 10,000’. In cultural references, the slow-moving turtle is also often a symbol of thoughtful consideration or wisdom. Senbazuru – the act of folding 1,000 origami cranes - is believed to help grant wishes.

These seven figures each represent a different god of good fortune. Their origins hail from China and India, with just one - Ebisu – originating in Japan. Representing good health, knowledge, longevity, happiness, wealth, art and beauty, each of the gods are seen in the kumade display riding on the Treasure Ship (Takara-bune) which is said to be piloted by the Seven Gods of Fortune through the heavens at the start of the New Year.

Shogi is a Japanese board game similar to chess, made up of many wooden pieces (koma). Kazari Goma (lit. decorative pieces) are larger-scale, decorative versions of shogi pieces, which are typically hung in front of restaurants and homes to bring good fortune. These decorative objects were developed in Tendo in Yamagata Prefecture, which is a famous producer of shogi pieces. The number of craftsmen making them has diminished in recent years, with Tendo the primary production area for all of Japan. On the kazari goma displayed on the kumade at Japan House, the character depicted is of hidari uma, literally, ‘left-facing horse’. This symbol is a mirrored image of the Japanese character for horse, uma. Read backwards using the Japanese syllabary, it becomes mau, meaning ‘to dance’ – such wordplay is common in Japan. With dancing common to celebrations and festivities in Japan, the word takes on associations of positivity and good luck.

Tori-no-Ichi, Japan’s ‘Rooster Markets’, are held throughout the country in November on designated ‘Rooster (tori) Days’ in accordance with the lunar calendar. The festivities begin with the beating of a large drum (taiko) at the stroke of midnight and continue on for 24 hours. The festivals, which originated as farmers’ markets for the sale of winter vegetables as well as bamboo rakes, began selling kumade in the Edo Period (1603-1868). It was then that the simple rakes became considerably more elaborate, adorned with a variety of emblematic talismans.

These vibrant, lively festivals still run today, with hundreds of stalls lined up selling kumade of varying prices. The smallest of kumade start at 1,000 yen – around £7/ €8 – though haggling on the price is common among festivalgoers. Each sale is indicated by ritualistic clapping from the kumade sellers. This noise, along with the bright colours of the kumade and smells from the surrounding food stalls create an exuberant festival atmosphere. It is said it is important to buy kumade in person at the market as the vendor passes the good luck onto the buyer through the transaction.