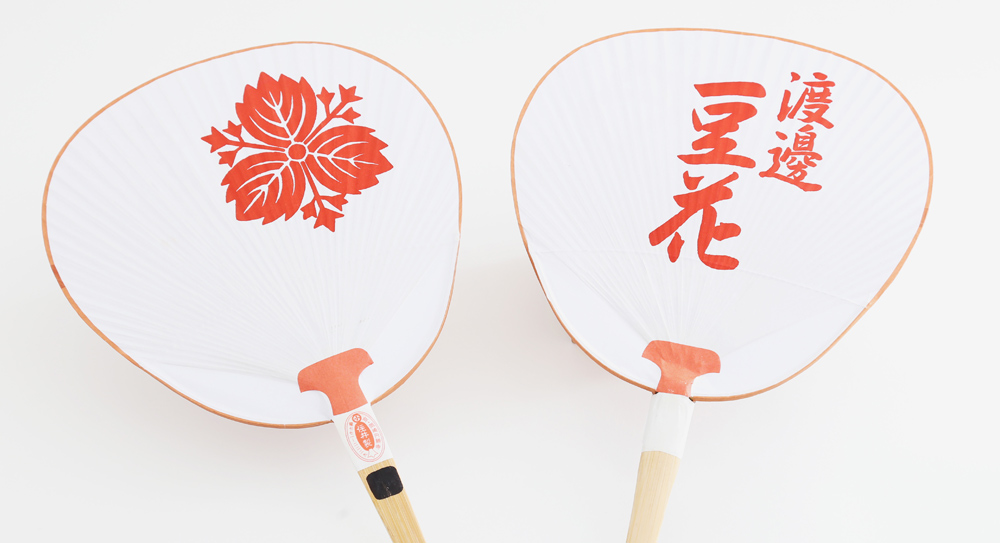 Throughout Japan’s history fans have provided a form of portable beauty, used in daily life as well as for display in temples, businesses and as works of art in their own right. In the summer 2019, The Shop at Japan House London presented a variety of hand-held fans from Komaruya, the longest running fan makers in Kyoto. Komaruya is well known for the quality of their fans, which have been crafted with care ever since Japan’s Heian period (794-1185).

Fans for every occasion

There are countless numbers of fan styles in Japan – almost as many as there are occasions to use them. From cha-sen, used during tea ceremonies, through to mai-ougi used in buyo dance and gunbai, employed by samurai officers for communication. Within these many categories are two common physical styles; sensu, folding fans, and uchiwa, round fans with a handle. Fans serve a far wider-ranging purpose than simply cooling the handler. In feudal Japan, fans would offer visual commands to soldiers, or be employed as weapons. More decorative fans act as a stylish accessory to an outfit or can be given as a gift. In ancient times, fans would ward off negative energy, making room for positive forces and prayers of happiness. Such small, indiscriminate objects often have a greater meaning in Japanese society.

Fans have been widely used in Japan since the Heian period. In the late 1500s, Emperor Ōgimachi appealed to his official fan makers, the Sumii family, to produce and spread the popularity of hand-held fans in order to stimulate Kyoto’s economy. The family established Komaruya in the Fukakusa district of Kyoto, where they could access abundant bamboo forests necessary for sustaining a high level of production. From this point onwards both sensu and uchiwa flourished in popularity throughout Edo period (1603-1868) Japan.

Fans have been used by geisha, geiko – geisha from Kyoto – and maiko during performances in a number of ways. They are used as a prop during mesmerising fan dances, which involve fluid, subtle movements and graceful gestures to captive audiences. They have also been employed for the purpose of advertising, with geiko writing the name of performers on one side, and the agency name or crest on the other, to hand out to the crowd or in the street. Geiko also sign fans with their own name and give them to important customers or to restaurants, where they are proudly displayed in the windows for passing customers to see. Komaruya still produce such uchiwa – intended for use by geisha, geiko and maiko during performances – today.

The making of uchiwa

Uchiwa and sensu were historically made with bamboo or cypress, though nowadays can commonly be made of paper or plastic. Decorated with waka poems, paintings or patterns, each fan is a visually arresting object of beauty. The creation of a single fan by expert craft workers can take up to 14 months and involve some 20 stages. Splitting the wood into ribs, producing the decorative paper, stretching and setting the paper and then cutting the fan into shape – many of these stages are completed by separate artisans who focus on one specific area of the craft. This ensures every element of the fan is made with absolute care and precision.

Komaruya fans are an important part of Japan’s craft history. The company continues to refine and perfect their techniques, in use as far back as the early 900s. Komaruya still produce their original creations, such as Fukakusa Uchiwa – the fans made in the Fukakusa district of Kyoto, as well as Kyo Uchiwa, also known as Gosho Uchiwa, the round fans associated with the imperial court. The designs imprinted on the fans reflect the lingering sensibilities of the Heian period during which they first flourished, when courtiers would keenly showcase scenes from the natural world and the changing of the seasons to indicate their good sense and sophistication. Japan House presented the artistry of the Heian period in the Living Colours: Kasane – the Language of Japanese Colour Combinations exhibition in spring 2019.

In the summer 2019, The Shop at Japan House displayed a variety of fans crafted by Komaruya in Kyoto. Using age-old design techniques, the craft workers continue to perfect every element of the design process. Both uchiwa and sensu styles were presented, depicting a variety of recognisable scenes and designs relating to the natural world, from Mt Fuji through to cherry blossoms. Maiko and geisha fans - still in use during geisha performances today - were also in The Shop. More information about the Living Colours exhibition and the enduring artistic influences of Heian period Japan can be found here.