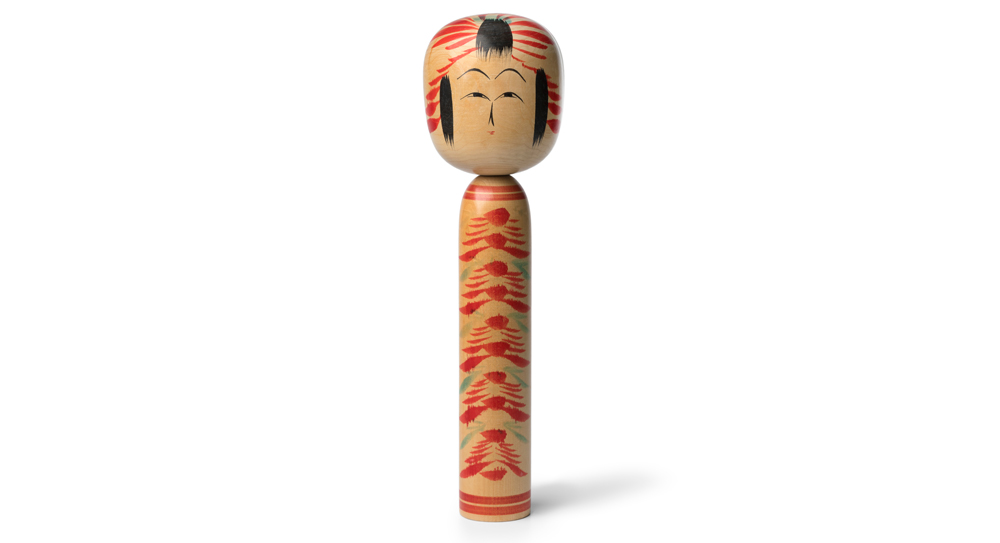 Kokeshi are wooden dolls that originate from the Tōhoku region of north-eastern Japan and which emerged as a folk craft from hot spring mountain villages at the end of the Edo period (1603-1868 CE). They are characterised by their elongated, limbless bodies, disproportionately large heads and delicate hand-painted features. All six prefectures in the Tōhoku region – Aomori, Akita, Iwate, Miyagi, Yamagata and Fukushima – have a heritage of kokeshi making and there are 12 styles of doll across the region, each hailing from a different hot spring (onsen) town or area, and differentiated by head and body shape, facial features and decoration.

Originally, each area in the Tōhoku region had its own local name to describe the wooden dolls they made. However, this had the potential to confuse collectors, so, in the 1940s, makers agreed to use one standard name: ‘kokeshi’, which is written in Japanese hiragana letters and has no widely agreed corresponding kanji (Chinese character).

Kokeshi were part of the focus of WOW: City Lights and Woodland Shade exhibition, held at Japan House between 21 November 2019 – 22 March 2020.

As there are few paper records, their precise origins are somewhat lost in the annals of time but it is thought that kokeshi first appeared in the Tōhoku region around the 1800s and were made by wood turners (who usually made plates and bowls) as toys for their children. The earliest examples are thought to have come from the Togatta Onsen area in Miyagi Prefecture. Kokeshi started out as simple wooden forms and gradually came to be painted with expressions and colourful kimono – the kind of kokeshi people know and love today.

Kokeshi dolls have no formal connection with Shinto or organized religion but, as the spirituality of the region has always been intrinsically connected with the forests, nature worship and animism, these wooden dolls were undoubtedly an important anchor of life in the mountain villages.

From childhood gifts to souvenirs

In the villages where kokeshi were made, they were often given as gifts on the birth of a child (rather like the way we give teddy bears as gifts to newborns nowadays), with the baby’s name painted on the reverse of the body. In the absence of other toys, the child would grow up playing with his or her kokeshi doll. With the arrival of the Meiji period in the 1860s, farmers without work during the colder months and tourists began travelling to the mountains to stay in rural inns and recuperate in the natural hot springs, or to make religious pilgrimages (the Tōhoku region’s Dewa Sanzan mountains comprise one of Japan’s most sacred destinations). The same wood craftsmen saw an opportunity to produce and sell kokeshi as souvenirs and kokeshi began to evolve from being a quaint folk toy to become an ornament and covetable collectors’ item.

How are kokeshi produced?

Kokeshi dolls are hand-carved on a lathe, using mainly dogwood or cherry wood. With the exception of actually cutting down the trees, kokeshi makers carry out every part of the making process themselves – everything from stripping off the bark and drying the wood, to chopping it into pieces, crafting the head and body (from the same piece of wood), attaching the heads, and painting and waxing. These skills were traditionally passed down through the family line, with (male) kokeshi masters usually training their first-born sons as apprentices in their own homes and workshops. (Some operated a family business in which the father and son would carve the kokeshi and the mother would paint them.) However, with many master kokeshi makers now in their late 70s and older, attention is being focused on securing the future of this important folk art by training a new generation of artisans – including young women – first in local colleges, then under the guidance of a kokeshi master.

Tools of the trade

On the lathe, the kijishi – woodworkers - use four to five different chisel-like tools to carve each doll and to achieve the distinct thickness, shapes, curves and lathe lines that their particular style requires.

Remarkably, each of these tools has also been handcrafted by the artisan themselves, in part to achieve a bespoke level of comfort for handling but also because there are so few blacksmiths left with the skill and knowledge to create such specialist tools. Painting is done in a palette of mainly black, red and green ink, applied in delicate single strokes of a weasel-fur brush.

What makes a kokeshi?

There are at least 12 official styles of kokeshi, each of which is named after a place and has a set of rules on shape, colour and motifs. The 12 main types are Hijiori, Kijiyama, Nakanosawa, Nanbu, Naruko, Sakunami, Togatta, Tsuchiyu, Tsugaru, Yajiro, Yamagata and Zao. Historically, the standard height of a kokeshi doll was 30cm, but the new norm of 18cm reflects the reality that contemporary buyers are living in smaller homes and have less space to display their ornaments.

Wooden dolls that fall outside these prescribed styles – such as those with Western clothing, shapely bodies and carved hair styles – are considered ‘creative kokeshi’ and are contemporary iterations. Creative kokeshi can be found all over Japan, unlike original kokeshi, which are only from the Tōhoku region.

One of the best-known styles of kokeshi comes from the Naruko Onsen area in Miyagi Prefecture. Naruko kokeshi have a stable shape with a slightly concave body and spherical head that squeaks when it is turned. The face has a single eyelid and tiny red lips, with hair painted in bunches and a fringe; the body is decorated with chrysanthemums.

Elsewhere, the rarest style comes from Hijiori Onsen in Yamagata, where there is only one master kokeshi maker still working, while in Nakanosawa Onsen in Fukushima the unmistakable Tako Bozu kokeshi – which is characterized by a balding pate and wide almond eyes surrounded by red rings – was officially recognised as the 12th authentic style in 2018.

Where to see kokeshi in Japan

The world’s largest collection of kokeshi is held in Miyagi Zao Kokeshi Museum at the foot of Mt Zao in Miyagi Prefecture and is home to more than 5,000 examples donated by collectors or gifted by their estates. The museum incorporates a studio in which visitors can meet apprentice kokeshi makers and be guided through decorating one of their own. The permanent collection includes many rare pieces by important kokeshi masters.

Visitors can see how the patina of the wood has deepened over time, admire the differing kimono designs – irises, cherry blossom, chrysanthemum – and study the dolls’ enigmatic faces: are they happy, thoughtful, annoyed, melancholy? Everyone sees something different in the face of a kokeshi – and that remains the enduring appeal of these icons of Japanese folk art.