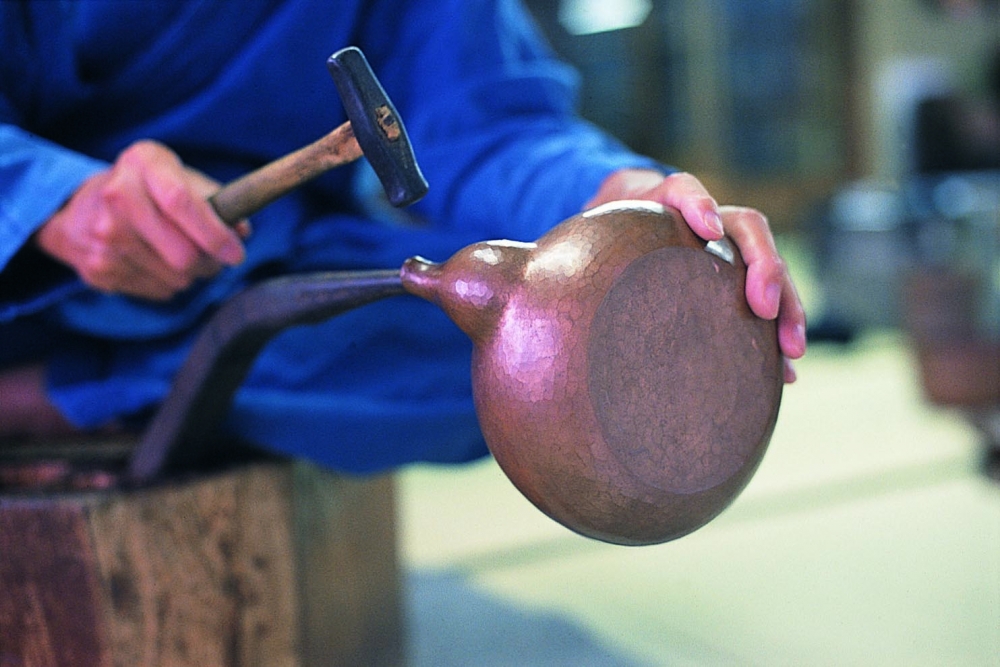 Gyokusendō was founded in 1816 in Tsubame in Niigata Prefecture. For over 200 years the family-run workshop has produced hand-hammered tsuiki copperware. This is created by shaping vessels through the hammering and beating of a single sheet of copper.

In the late Edo Period (1603-1868), a travelling craftsman from Sendai in northern Japan introduced the manufacturing of tsuiki (hammer cast) copperware to Tsubame. In 1816 Tamagawa Kakubei founded Gyokusendō in Tsubame in Niigata Prefecture. Tamagawa was one of the few who successfully mastered this difficult process. Supporting the development of tsuiki copperware in Tsubame was the fact that raw materials were easily obtained, as fine coppers were produced in the nearby village of Yahiko.

Gyokusendō first began by manufacturing everyday implements such as pans, pots and kettles, and later gradually added artistic elements and more decorative items. When Japan participated in the Vienna World Exposition for the first time in 1873, Gyokusendō products were selected for display.

The making of hand-hammered tsuiki copperware

The Japan-British Exhibition was held at White City in London in 1910. Spread over 22,550 square metres, it was the largest international exposition that Japan had ever participated in. Exhibits included rare art displays, elaborate architecture models and two authentic Japanese gardens were created at the site. It was visited by over 8 million people. The work of Tamagawa Kakuhei, third generation of Gyokusendō (1853-1922) was displayed at the Japan-British Exhibition of 1910 and was awarded the silver prize. The certificate from Gyokusendō’s participation in this historic exhibition is on display at Japan House alongside works by Tamagawa Norio, the sixth generation, and Tamagawa Motoyuki, the seventh generation of Gyokusendō, during the ‘Biology of Metal’ exhibition. Gyokusendō’s skilfully crafted objects are held in such high regard that they have often been invited to dedicate new Gyokusendō creations to the Imperial Family on auspicious occasions.

The Japan-British Exhibition held at White City in London in 1910.

The tsuiki metalworking technique of Gyokusendō is designated an Intangible Cultural Property by Japan’s Agency for Cultural Affairs and the master craftsman during the sixth generation Tamagawa Norio (1942-) was designated a ‘Living National Treasure’ in 2010. Visitors to Japan House were able to see works by Norio and his son Tatsushi on display in The Shop throughout the BIOLOGY OF METAL exhibition (6 September – 28 October 2018).

What they make today

Today, Gyokusendō continues manufacturing with techniques and processes handed down through their family for generations, producing handcrafted tsuiki copperware pieces. Among the collection are kettles, vases and pieces for tea and coffee.