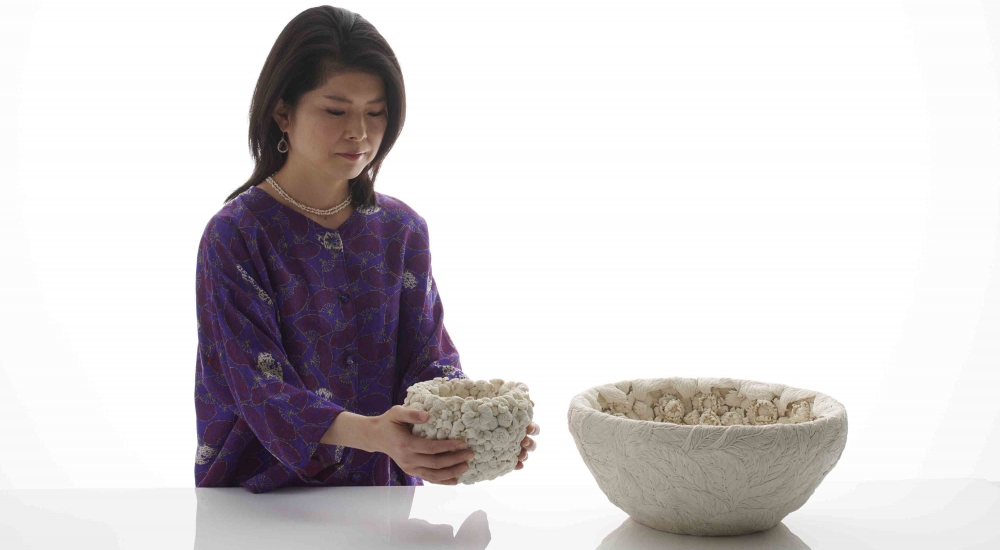 In September 2018, Japan House had on display 'A Very Large Oval Nazuna Vase' by Japanese ceramicist and sculptor Hosono Hitomi.

Hosono’s works of art are well known for their intricate botanical designs and leaves sculpted on bowls and vases. Each leaf is carefully sculpted into a mould and slowly applied to a hand-thrown base. Hosono Hitomi's art can be defined as a bridge uniting British porcelain techniques and Japanese attention to detail together with a sense of the spiritual presence of the worker during the making process.

Often the memories we bring from childhood are carved in our subconscious being. This thought perfectly relates to Hosono’s creative evolution. 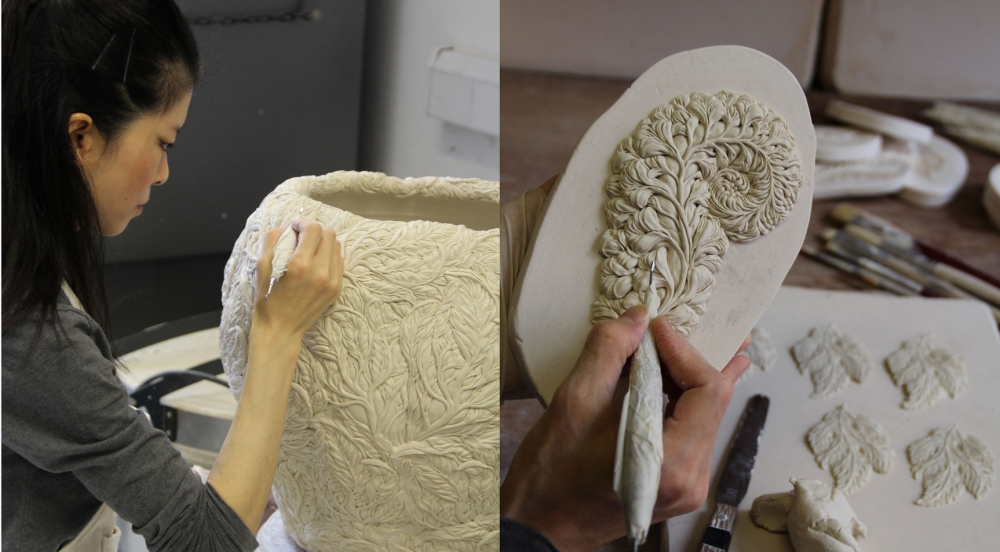 Currently London-based, Hosono Hitomi was born in 1976 in Tajimi, Gifu Prefecture, an area well-known in Japan for its rich heritage in ceramics. As the daughter of rice farmers, and granddaughter of a plaster and ceramic worker, Hosono spent much of her childhood surrounded by tiles, pottery and rice fields.

The unique sounds and undulating shapes, made by the autumn wind in the rice fields, were in fact some of the first inspirations that still continue to bring poetry to each tendril of her works.

Hosono studied Ceramics at Kanazawa College of Art, where she developed her knowledge of the Kutani ceramic tradition of Kanazawa City, Ishikawa Prefecture, an area famed for its production of the high-quality gold leaf. 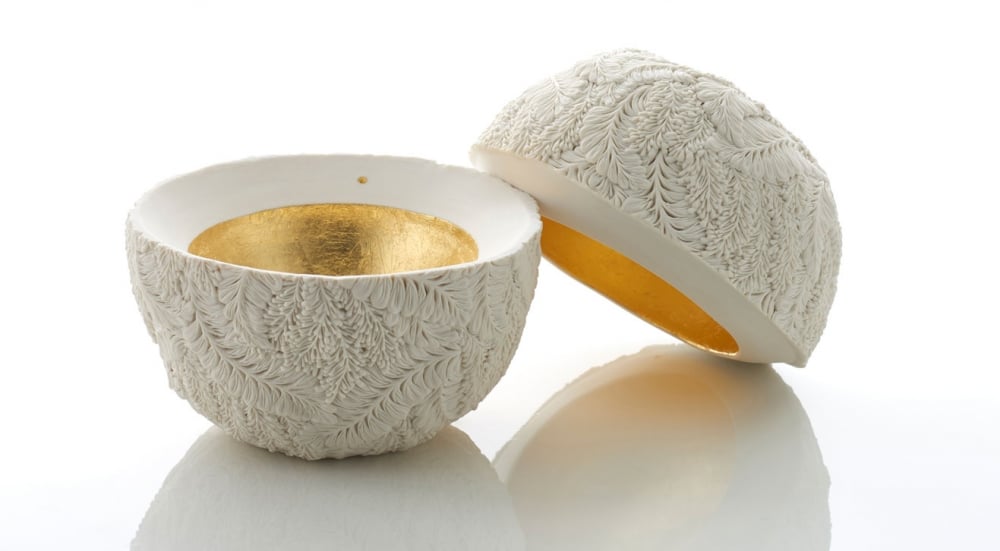 She then continued her artistic training in Copenhagen and finally in London, where she Studied an MA in Ceramics at the Royal College of Art. It was not until she came to England and spent a few weeks as an intern at Wedgwood Factory that she started learning the 250-year-old Jasperware technique of ‘sprigging’, which laid the groundwork for her work evolving from ceramics to include more sculptural forms. 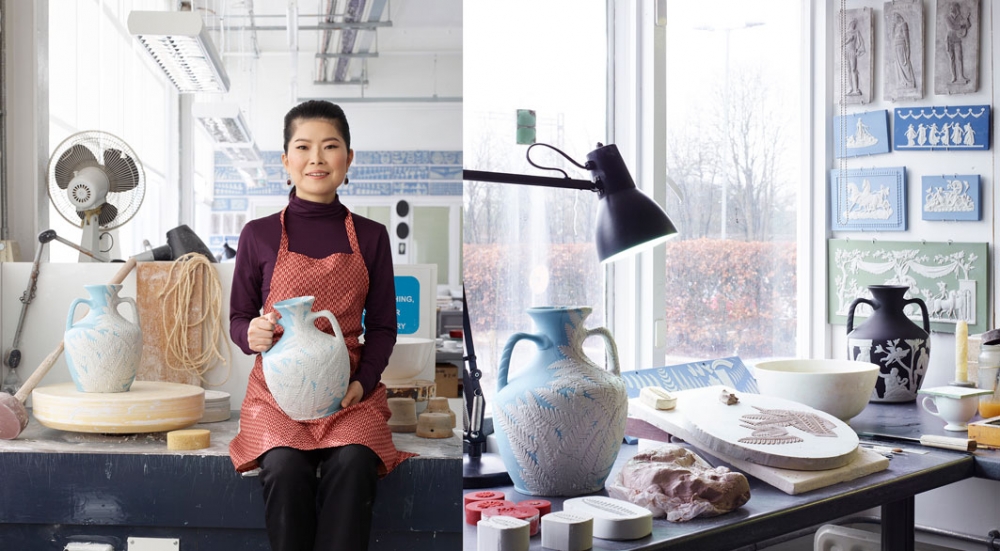 Hosono Hitomi at Wedgwood Studio holding her 'Shoka Vase' as part of the Wedgwood Collection, (2018). Images courtesy of World of Interiors.

In 2018 she was chosen to be the first-ever artist-in-residence at Wedgwood, where she developed her own take on the iconic British brand’s classic designs. 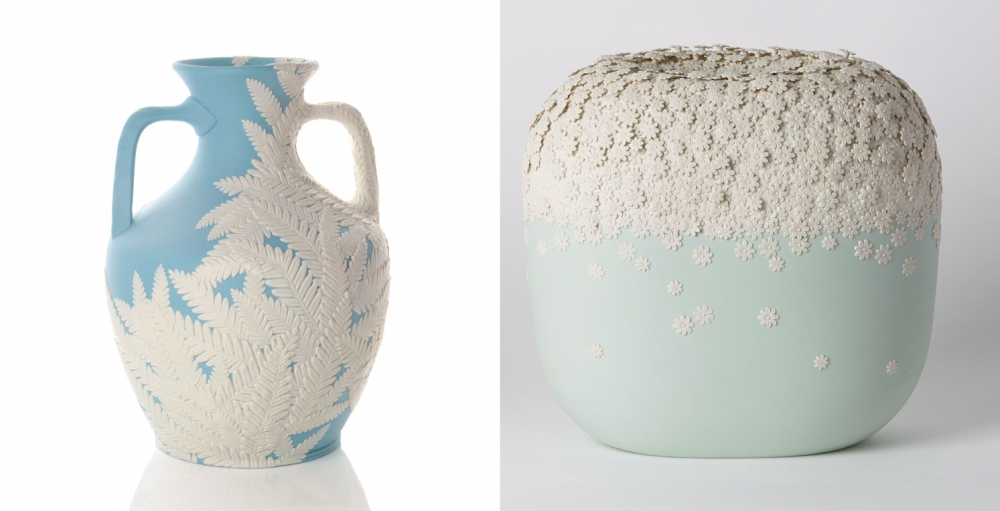 In a way, Hosono’s work brings to life the porcelain staticity, adding movement, light and depth to each piece. There is always a detail more to catch, a new harmony to follow, a new intricate tendril to discover.

"I find myself drawn to the intricacy of plants, examining the veins of a leaf, how its edges are shaped, the layering of a flower’s petals. I look, I touch, I draw."  Hosono Hitomi.

'Sprigging' is an ancient technique, used since the 6th century AD for decorating pottery, which was adapted by Josiah Wedgwood in the 1770s and used on Jasperware. By pressing clay into a mould, it is possible to create the same form of the mould itself. The moulded reliefs are used for ornamentation on a ceramic base. The way Hosono embraced this technique is quite unique. She moves forward from ornamentation - as it is known in the porcelain tradition - and translates the botanical beauty of nature to create entire vases with intricate reliefs of blooming foliage, leaves and flowers. The decorations are generally thin, multilayered and full of finely-added details.

Hosono Hitomi is represented by Adrian Sassoon, a UK’s leading dealer in contemporary decorative works of art. Hosono's pieces can be also found in the permanent collections of the British Museum and the V&A. Here is a selection of some of her most famous and admired works.

This piece comprises 1,000 leaves that have been individually made in a sprig mould and then attached to a core. It gives the impression of leaves moving and rustling on the outside and leads the eye into the very centre. It took over a year to design, model and carefully construct this work. This piece is a part of the permanent collection of the Japan galleries at the British Museum, surrounded by works full of history and classic craftsmanship.

'A Very Large Oval Nazuna Vase' is a moulded, carved and hand-build porcelain piece with a yellow gold leaf interior. The intricate and finely sculpted exterior is covered in a lush Nazuna (shepherd’s purse) leaf pattern, in Hosono's interpretation of the classic sprigging technique. Painstakingly made by hand, porcelain clay has been pressed into moulds to create the impression of multitudes of delicate leaves. The leaves have then been carefully carved and densely applied to a hand-thrown base. The interior is expertly enlightened by applying yellow gold leaf. This is a reference to her Buddhist family origins and the renowned interior of the Butsudan, the Buddhist altar containing golden statues. For Hitomi’s grandmother the Butsudan represented heaven, where her family ancestors continued to live and where she would eventually go to join them.

“When I am applying gold leaf inside my porcelain pieces I remember my grandmother’s words. Then I feel there’s a heaven behind the gold leaf where my ancestors, including my grandmother, are now living.” Hosono Hitomi