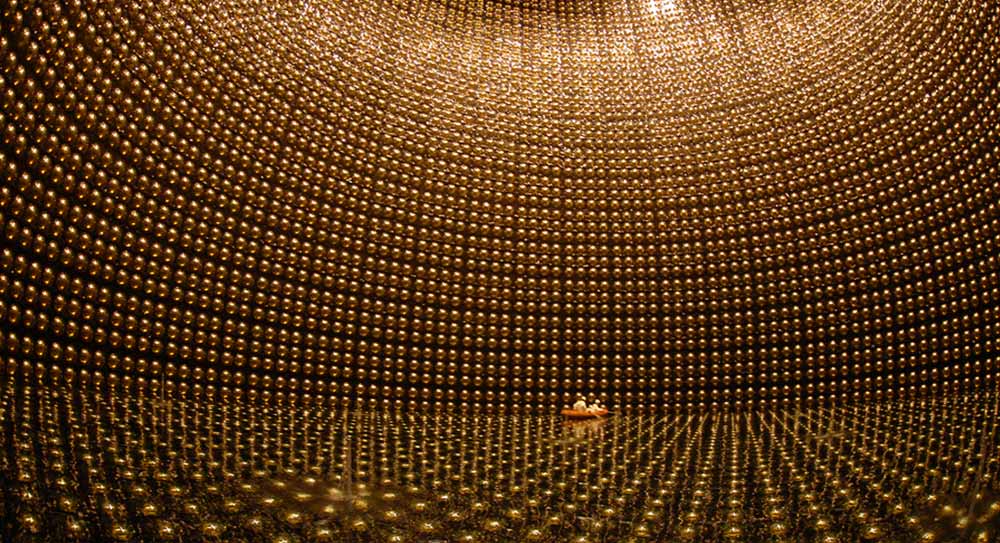 Humanity’s quest to understand the structure of nature is an eternal journey. In the 20th century, scientists discovered that 12 elementary particles, tinier than any atoms, and four fundamental forces govern all phenomena in the universe. The Standard Model developed by modern particle physics predicted almost every known feature of the elementary particles except one: the mass of neutrinos. The neutrino is the least understood elementary particle in nature. Incredibly difficult to study, they are known as ‘ghost particles’, because they rarely interact with their surroundings and pass through most detectors.

The Super-Kamiokande neutrino observatory is a tank filled with ultrapure water, 40 metres in height and diameter, buried deep under a mountain in Gifu Prefecture in Japan. The detector is equipped with over 10,000 of the world’s largest ultra-sensitive light sensors which can detect weak light from neutrino interactions. It was here in 1998, that Professor Kajiita and his team discovered a phenomenon called ‘neutrino oscillations’, which proved that neutrinos have mass. This discovery challenged the Standard Model for particle physics and led to Professor Kajita being awarded the Nobel Prize in Physics in 2015.

In December 2019, Japan House London welcomed Professor Kajita Takaaki, Director of the University of Tokyo’s Institute for Cosmic Ray Research (ICRR), who shared behind-the-scenes insights into the history of his discovery and discussed the future prospects of the very exciting field of neutrino physics.

This is the beginning of an all-new chapter in particle physics. The role of neutrino mass is still unknown and scientists all over the world, including in Japan, are building new experiments to deepen their understanding of neutrinos.

Professor Kajita Takaaki was born in Higashi-Matsuyama, Saitama, Japan. He studied at Saitama University and at the University of Tokyo where he received his doctorate in 1983. Since 1998, he has been affiliated with the Institute for Cosmic Ray Research (ICRR) which hosts dozens of projects all over the world, and become the institute’s director in 2015. He was awarded the Nobel Prize in Physics in December 2015. Recently, ICRR have started the operation of the Kamioka Gravitational Wave Detector (KAGRA) at the Kamioka mine next to the Super-Kamiokande. The next-generation experiment, Hyper-Kamiokande starts construction in 2020.

The event was held in partnership with King's College London and the Embassy of Japan in the UK, and was supported by JENNIFER2.